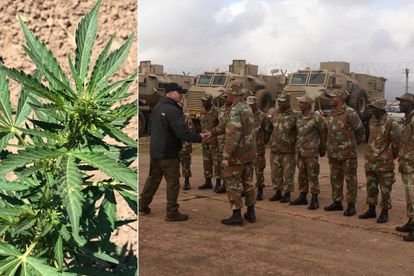 Four SANDF air force hopefuls took the department to court after they were kicked off the programme for having cannabis in their system. Photo: 7th Army Training Command and Oregon Department of Agriculture / Flickr

Four SANDF air force hopefuls took the department to court after they were kicked off the programme for having cannabis in their system. Photo: 7th Army Training Command and Oregon Department of Agriculture / Flickr

The discovery of cannabis in the system of four men may have ended their dreams of joining the SANDF as air force cadets. The aspiring trainees were removed from the training program, pushing them to take action in defence of their dreams.

The group of four men brought the matter, along with the SANDF, to court. They expressed that the minister and the department were denying their right to partake in the use of the substance in the safety and privacy of their personal homes.

An application was hastily presented to the Gauteng High Court in an attempt to overturn the ruling of the SANDF. The men highlighted that they not only used the substance within the law but that they were under the impression that their applications were unsuccessful prior to consuming the substance.

The men claimed that they were unexpectedly contacted and told to report to the Skartkop Air Force Base urgently. While on-site, a search was conducted by the military police along with the canine unit after the smell of cannabis was detected in the air.

The search put aside two members of the programme. Initially, there wasn’t enough evidence to confirm whether or not the traces found were illegal substances. Due to suspicions risen from the search, the cadets were instructed to take a blood and urine tests.

Due to the number of tests that needed to be conducted and the time needed to conduct the tests, a decision was made to allow the candidates to proceed with the training while the results were pending.

In March of this year, the four men were informed that they had tested positive for cannabis and were instructed to remove themselves from training due to ‘medical reasons’. They were transported to Pretoria under the impression that they would be re-evaluated but were instructed to contact their parents to collect them.

The applicants lodged complaints with the Military Ombudsman under the notion that they are well within their right to use cannabis for medicinal or recreational purposes in the privacy of their own homes.

The men argued that the substance was detected in their blood because they had consumed it while still at home. An additional test was conducted at the same pathology laboratory and the results came back negative, reports IOL.

The judge informed the applicants that they had to wait for the Military Ombudsman’s decision before they could turn to a court.