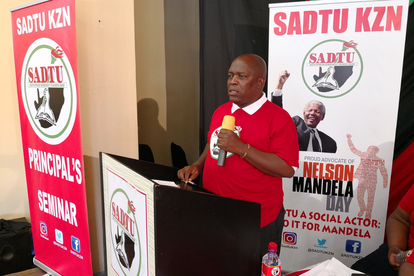 SADTU has threatened to boycott MultiChoice over the removal of a Russian channel. Image: SADTU/ Twitter

SADTU has threatened to boycott MultiChoice over the removal of a Russian channel. Image: SADTU/ Twitter

SADTU (South African Democratic Teachers Union) has lashed out over MultiChoice’s decision to block Russia Today amid the continued conflict in Ukraine.

Taking to social media, SADTU demanded that the channel should be reinstated with immediate effect. The union warned that it would institute a boycott unless this demand is met.

“SADTU – the biggest union in the public service sector with close to 270 000 members is calling on MultiChoice to reinstate RT (Channel 407) with immediate effect or face boycott.”

The union insisted that South Africa isn’t a ‘banana republic’ and slammed the move as an insult to ‘media freedom’.

“Blocking RT on MultiChoice’s DStv is an insult to media freedom and freedom of expression in South Africa. Our country is not a Banana Republic where citizens toe the line. We refuse to be indoctrinated by CNN and BBC and all western leaning ideologies in a country where the right to freedom of expression which includes the freedom of the press and other media and freedom to receive or impart information of ideas is guaranteed.”

Union turns to Minister amid debacle

Furthermore, the union highlighted the immense importance of having access to varying views on the conflict.

“We have every right to access different views on the Russia-Ukraine war. We therefore cannot allow MultiChoice, whom we pay millions of rands, to play politics and take away this right. We refuse to be subjected to this hypocrisy. This act is more than about trampling on our rights but is racist.”

SADTU concluded its comments on the subject by revealing its intention to approach the government in order for them to intervene.

“We will be writing to the Minister of Communications calling on her to instruct Multichoice to reinstate RT or face the challenge of its licence and monopoly. As SADTU we denounce violence and wars, but we advocate for dialogue to resolve disputes.”

“However, Multichoice’s decision destroys democracy and does not promote a balanced debate on the war, and we reject that because we fought for our freedom and democracy.”

MultiChoice’s explanation for the move

In a brief statement MultiChoice explained why the service was suspended, noting that EU sanctions had added to the situation.

“MultiChoice confirms that as of Wednesday 2 March 2022, Russia Today shall not be carried on DStv. Sanctions imposed on Russia by the EU has led to the global distributor of the channel ceasing to provide the broadcast feed to all suppliers, including MultiChoice.”