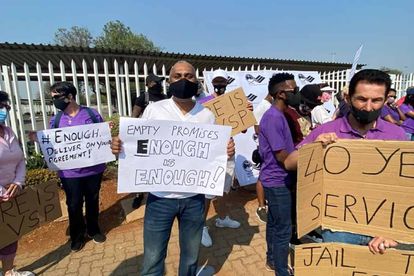 Both unions staged a picket outside SAA’s headquarters in Kempton Park, Johannesburg on Friday, September 18, 2020.

“We have every right to be angry. There is nothing left…Those who stole from SAA should be the ones to pay. (The shareholders and board) knew about the looting and they did nothing,” Numsa spokesperson Phakamile Hlubi-Majola said to members.

“If you don’t respond to our demands, we are going to make this country ungovernable, and it’s not just us – the working class is angry, and they’ve got good reason to be angry”

DPE misses deadline to pay up

Both Sacca and Numsa have handed over a joint memorandum of demands to the Department of Public Enterprises (DPE), which includes funding for the business rescue process.

SAA was placed under business rescue in December 2019 is undergoing restructuring which will see 3 000 workers lose their jobs.

The DPE was given until Thursday, 17 September 2020, to cough up at least R10.4-billion for the airline to be restructured, but failed to meet the deadline.

Now Sacca and Numsa have given DPE a week to respond to their demands and threatened to take the matter to court, should it fail to do so.

The department said it was still in the process of finding money to fund the process, including attracting equity partners that would inject capital into SAA, in exchange shares in the carrier.

“The Department of Public Enterprises believes the key to solving the difficulties facing SAA is the finalisation and implementation of the business rescue process; followed by the start of a restructured airline, appointment of a new board and executive team; and securing a credible strategic equity partner that can introduce the required technical, financial and operational expertise into the business,” DPE said.