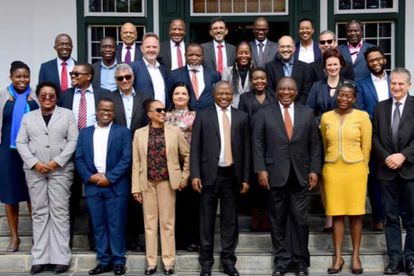 The council meeting’s purpose was to serve as a forum for in-depth and structured discussions. The 18 members would discuss emerging global and domestic developments, economic and development policies, and facilitate their socialisation and diligent executions.

Ramaphosa’s intentions for the council

Ramaphosa initially revealed his desire to establish such a council at his first State of the Nation Address. He shared its aim at the time saying:

“[The council would] ensure greater coherence and consistency in the implementation of economic policy and ensure that we are better equipped to respond to changing economic circumstances.”

In his opening statements, the president shared his hopes that the council would find practical solutions to the “complex and pressing challenges our economy faces.” He noted how South Africa’s economy was not performing “at the same level as other upper middle-income countries.”

He blamed this on the uneven distribution of wealth and income due to apartheid. Ramaphosa stated how the country lagged behind for the under-five child mortality rate, life expectancy, and school completion rate.

The state of poverty in our country

He noted how poverty was rife with nearly half of the population considered to be “chronically poor. Poverty was said to be at its highest in Limpopo and the Eastern Cape.

The Western Cape and Gauteng had the lowest rates, with Black people being the most affected. Children were said to be most impacted including those who lived in rural areas, and “people with little or no education.”

#EconomicAdvisoryCouncil @CyrilRamaphosa will this afternoon chair the first meeting of the Presidential Economic Advisory Council at Tuynhuys in Cape Town.

The President appointed the 18-member council with effect from 1 October 2019 for a three-year term. pic.twitter.com/tvvCCxEm9v

The president shared how unemployment was still high at 29 percent in the second quarter of the year. South Africa ranked 82nd among 190 countries in the World Bank’s Ease of Doing Business Index.

The National Economic Development and Labour Council (Nedlac) was monitoring the commitments made at the Jobs Summit with regards to job creation.

Gains made by the Department of Home Affairs

?: #EconomicAdvisoryCouncil @CyrilRamaphosa says the Presidential Economic Advisory Council comprises of a diverse group of experts – individuals who have done work in SA, Africa and other parts of the word – and he believes that their council will be very valuable pic.twitter.com/sIgb9UdwLP

Ramaphosa said the visa regime for tourism and high skill immigration was well underway. He shared how the Minister of Home Affairs, Aaron Motsoaledi, had waived the requirement that “children entering South Africa should present unabridged birth certificates.”

The department had also extended visa waivers to visitors from several countries. Visa requirements had also been simplified for China and India.

A new electronic visa (e-visa) system was going to be piloted from November.

?: #EconomicAdvisoryCouncil @CyrilRamaphosa unpacks some of the reforms that are being implemented as a catalyst for economic growth. He says ICASA has started the process of licensing service providers in relation to the release of spectrum pic.twitter.com/qYkbrSn4ys

The South African president noted how “a policy directive on the release of spectrum was issued and the regulator ICASA has begun the process to license this spectrum.” A youth employment strategy was said to be developing.

Ramaphosa shared that “engagement with organised business on the Ease of Doing Business Roadmap has begun.” Invest SA was working to improve the processes of “starting a business, registering property, dealing with construction permits, paying taxes, and trading across borders.”

He revealed that cabinet was discussing energy strategy and policy using the Integrated Resource Plan. The results, thereof, would be released soon.

The president noted how Eskom’s future would be shared with cabinet. The paper which would be tabled aims to find ways to help the utility find financial and operational stability.

The Infrastructure Fund was said to be in the process of being formed. Its progress and those of other initiatives, would be presented at the South Africa Investment Conference in November.

In the second quarter, the GDP growth rebounded by 3.1 percent on a quarter-to-quarter basis. This was due to the growth seen in the “mining, finance, government and trade sectors.”

“The Medium Term Strategic Framework, which is government’s programme of action for the next five years, will focus on those catalytic actions that will spur the economy into action.”

The president shared that the state intended to create sustainable jobs in the green economy, the care economy, infrastructure development, in townships, and rural areas.