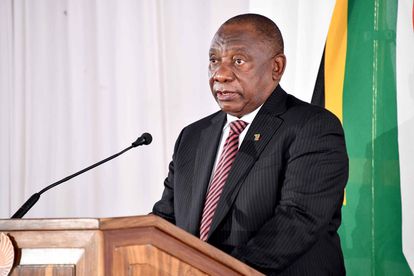 President Cyril Ramaphosa is yet to give feedback on a report submitted by the Minister of Defence and Military Veterans Nosiviwe Mapisa-Nqakula on the African National Congress’ (ANC) controversial trip to Zimbabwe, using a jet by the South African National Defence Force (SANDF).

The party, led by secretary-general Ace Magashule, flew to Zimbabwe to engage the ruling Zanu-PF party on the ongoing economic and political crisis.

Following the backlash, Ramaphosa announced he had given the minister 48 hours to give reasons why ANC officials boarded the plane.

In a statement, Ramaphosa said Mapisa-Nqakula had permission to travel to Zimbabwe to meet her counterpart to discuss defense-related matters in the region, following a recent SADC summit.

The minister’s spokesperson Siphiwe Dlamini has said Mapisa-Nqakula completed and signed off on the report.

DA and EFF want the ANC to pay up

The Democratic Alliance was first to speak out, demanding an explanation from the president and that the party foot the bill for the trip.

The DA’s Kobus Marais said Ramaphosa needed to take action against those involved in the scandal.

“Clearly, the visit to Zimbabwe was not of any national interest. There was a deliberate blurring of state and party lines to allow abuse of state machinery,” Marais said.

“Given the budgetary constraints on the SANDF, this excursion by the ANC is tantamount to theft and compromises the integrity and safety of South Africa,” he further said.

The Economic Freedom Fighters (EFF) have also added their voice to calls for the ANC to pay for the trip.

“And we shouldn’t be too dramatic about it. We will ask the secretary of defence to invoice the ANC, so the ANC pays and they don’t repeat that mistake,” said EFF leader Julius Malema.

Malema spoke to journalists outside the Randburg Magistrates’ Court on Monday, 14 September 2020, on assault charges.

“But going to Zimbabwe, even under lockdown regulations, it is necessary, it’s urgent, and therefore it will be reactionary for anyone to say the leaders should not have gone to Zimbabwe,” he said.