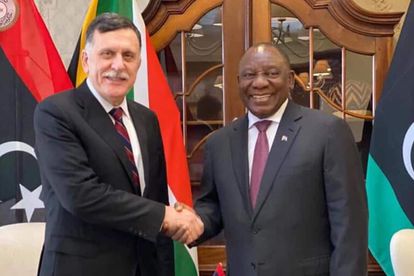 President Cyril Ramaphosa travelled to the Republic of Congo on Wednesday for crisis talks on the Libyan civil war. With him is Libyan Government of National Accord (GNA) Prime Minister Fayez al-Sarraj.

President Cyril Ramaphosa travelled to the Republic of Congo on Wednesday for crisis talks on the Libyan civil war. With him is Libyan Government of National Accord (GNA) Prime Minister Fayez al-Sarraj.

President Cyril Ramaphosa, in his capacity as chairperson of the African Union (AU), travelled to Oyo, in the Republic of Congo Republic, on Wednesday 11 March to discuss the ongoing unrest in Libya.

He has made the trip at the invitation of the central African country’s leader Denis Sassou Nguesso, who hopes to hold crisis talks over Libya’s civil war, which has seen warring factions escalate violence in recent months.

The inaugural meeting of the Contact Group on Libya is scheduled to take place from 11 to 12 March.

‘Africa must unite to resolve crisis’

Nguesso, who is the chairperson of the AU high-level committee on Libya, held talks with the union about military confrontations in Libya between rival political groups. Civil war has engulfed the country and threatens the lives of its people and those in neighbouring countries.

International countries, such as France, are increasing deliveries of suspected military supplies to factions in the conflict, ignoring a United Nations (UN) embargo as the shattered country braces for a new round of fighting.

“Our duty for Africa still challenges us today. We must put the Libyan issue at the top-priority level on the agendas of the African Union and the United Nations in terms of peace and security,” Nguesso told the AU last week.

“[African countries must unite to achieve] the resolution of the Libyan conflict because our continent must speak with one voice on the basis of our unique approach already defined by the AU, beyond any ambiguity,” he said.

Ramaphosa will form part of a task team established in light of the crisis, with a contact group chaired by Congo providing political leadership and coordinate international efforts in the search for a solution to the crisis.

He hosted Prime Minister Fayez al-Sarraj from the Libyan Government of National Accord (GNA) on Wednesday in Pretoria before flying out to the Congo.

According to the Libyan Observer, the two officials talked about cooperation between the countries in various spheres, such as education, agriculture, industry, health and the participation of South African firms in rebuilding Libya once the conflict is resolved. Foremost on the agenda was consultation about the ongoing war that has been raging since 2014.

Deputy President David Mabuza will fill in for Ramaphosa until he returns at the end of the week.