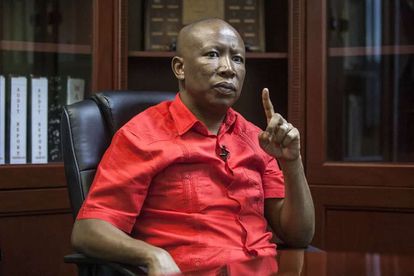 As racial tensions simmer in Free State, Senekal, leader of the Economic Freedom Fighters (EFF), Julius Malema has launched yet another blistering attack on President Cyril Ramaphosa, accusing him of defending the interests of white people, over the black majority.

The fiery leader did not hold back, during an interview with Newzroom Afrika, ahead of the party’s planned demonstration in Senekal on Friday, 16 October 2020.

“There’s too much white arrogance here (and) you have allowed it because your president was bought by white people,” he said.

“Not only now, from when he was young. He was adopted by a London family”

Malema has never been shy about his remarks on race, which have led to accusations of racism from the Democratic Alliance (DA) and Afriforum.

He further took a jab at the president’s accent, saying:

According to Malema, the so-called white arrogance was not only prevalent within the farming community but also reached the boardrooms. He claims the president is protecting white business owners who are reversing BEE deals which were signed 10 years ago.

Farm manager Brendin Horner was murdered earlier on Friday, 2 October, on a farm. His body had been tied to a pole. The South African Police (SAPS) in the Free State subsequently opened a murder investigation and later arrested two suspects.

Chaos erupted at the Senekal Magistrate’s Court where the two men were appearing, as outraged members of the farming community violently stormed the area. The farmers also set fire to a police vehicle, demanding that the suspects be released to them.

A 52-year-old businessman in Senekal has already been arrested in connection with the Senekal disorder.

The minister of Police Bheki Cele has visited his family where he assured them government was doing all they could to ensure his killers are brought to book.

Family Spokesperson, Mr. Gilly Scheepers said “We really appreciate the visit and we really hope it will bring a turning point in the tension in this area. It is unfortunate but maybe the loss of a young man’s life will bring peace and stability in the farming community in South Africa”.