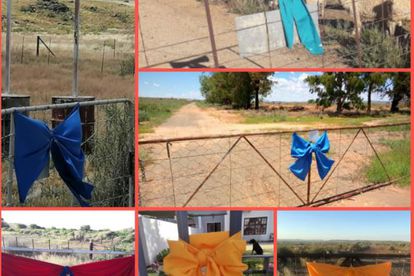 The recent rainfall in the Northern Cape was celebrated beautifully by the local farmers and their wives.

Farmers in the Northern Cape have been relieved about the recent rainfall in the province, so much that farmers’ wives started a great intuitive to show their gratitude.

BEAUTIFUL COLORFUL BOWS FOR THE RAIN CAN BE SEEN FROM AFAR

Colorful big bows are seen tied to the entrance gates of the farms in Carnarvon. These bows are the wives’ way of showing their thanks for the good rains.

Riana Vermeulen inspired all the farmers’ wives in Carnarvon to show their gratitude with bows.

According to a report by The Good Things Guy all the wives were eager to start making their bows.

THE WIVES JUMPED AT THE CHANCE TO SHOW THEIR GRATITUDE

Vermeulen said after the rain they ordered 160 metres of material from Oudtshoorn, which is about 350 km from Carnarvon.

“Every woman got two metres of either blue, yellow, or red. With that, they were to make a bow or bows to their liking and put it on their farm gates and fences for everyone to see.

“Therefore, when driving through the Karoo and Carnarvon, be on the lookout for our colourful bows that show our appreciation, thankfulness, and gratitude towards our Father and every donator,” Vermeulen said.

RAINFALL HAS BEEN A BLESSING FOR THE FARMERS

The Northern Cape is a dry region, known for its hot weather but also great for raising lamb. The recent rainfall has truly been a blessing for the farmers in the region.

Last month residents in Upington recorded more than 10mm rainfall in the town.

The blessing came amid the heavy rainfall that caused havoc across the country, damaging roads and causing flooding in some areas.