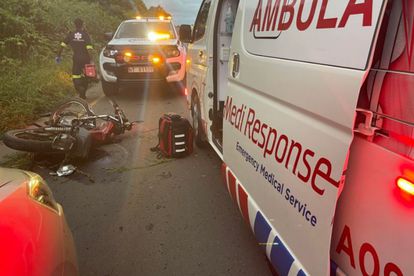 A 44-year-old motorcyclist was injured after he was assaulted during a robbery on the northbound lane of the R102 at the Phoenix – KZN intersection on Friday afternoon.

The motorcyclist was on his way home when the incident occured.

A passerby reportedly witnessed the attack and robbery and called for assistance.

According to Reaction Unit SA, medics were dispatched to the location and on arrival met with the motorcyclist.

The victim reportedly explained that he was travelling to his residence in Tongaat – KZN when his Gomoto motorcycle experienced mechanical failure.

He was in the process of inspecting the bike when two unknown males approached him and produced firearms.

“They grabbed the motorcyclist’s backpack containing his Huawei P30 cellphone and wallet. The victim attempted to fight off the robbers when he was assaulted on his arm with the butt of a firearm.

“A shot was fired during the altercation. The man was recovering from injuries he sustained in a hijacking where he was shot in the face during the latter part of 2021.”

An extensive search for the suspects was launched however no arrests were made.

CYCLIST DIES AFTER COLLIDING WITH A BUS

In an unrelated incident, a twenty six-year-old motorcyclist passed away on Tuesday night following a collision with a bus in Pretoria.

The male was declared dead on arrival of Emer-G-Med paramedics following the collision on Boundary Road.

According to Emer-G-Med, reports from the scene are that paramedics arrived to find the man lying in the roadway with severe polytraumatic injuries.

“Unfortunately there was nothing paramedics could do to assist him and he was declared dead on their arrival,” Emer-G-Med said.