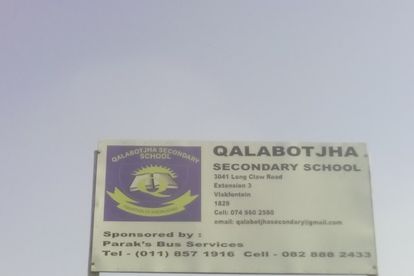 A Grade 11 pupil from Qalabotjha Secondary School was stabbed to death during a fight on Thursday. Image: Google Maps

A Grade 11 pupil from Qalabotjha Secondary School was stabbed to death during a fight on Thursday. Image: Google Maps

The learner accused of stabbing a fellow learner to death at Qalabotjha Secondary School in Vlakfontein, Gauteng has been remanded in custody.

Amogelang Nkomo, 20, appeared at the Lenasia Magistrates’ Court, facing a charge of murder.

The 20-year-old was remanded in custody until 5 December 2022 for him to appoint a lawyer.

Nkomo was arrested on 17 November 2022 following a fight outside the school premises wherein Sphiwe Cita, also a pupil at Qalabotjha Secondary was fatally stabbed. Cita was rushed to a nearby clinic but unfortunately died as he was receiving medical attention.

As previously reported, South African Police Service (SAPS) spokesperson in Gauteng, Lieutenant Colonel Mavela Masondo confirmed that a group of boys were fighting outside the school premises and that one of them was stabbed with a sharp object in the upper body.

The incident is believed to be related to gangsterism. The investigation into the late learner’s death continues.

The state reportedly opposed bail as the learner is accused of a schedule 5 offense adding that it will also be a risk should the accused be released on bail given the outrage of the community.