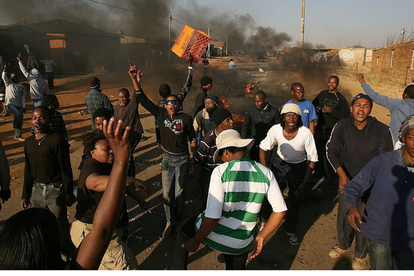 Mabopane residents have taken to the streets to protest over persistent power cuts in the township. Photo: Getty Images

Mabopane residents have taken to the streets to protest over persistent power cuts in the township. Photo: Getty Images

Protests broke out in Mabopane near Tshwane on Tuesday night as the community decried persistent power outages in the area.

Residents take to the streets to vent

The 14-second clip shows scores of people walking along a section of the neighbourhood to protest against their ongoing plight. Online users have circulated videos capturing similar scenes on social media.

The protesting group did not appear to be vandalising any infrastructure. However, it was not clear whether they may have burnt rubble or blockaded roads in other sections of the area.

The township, north of Tshwane, has reportedly been plagued by power disruptions. Some residents claim they have been without electricity for a fortnight.

Eskom recently announced that it will implement Stage 2 power cuts from 17:00 to 22:00 on Monday and continue until Thursday.

Do you live in Tshwane? Then find your load shedding schedule here.

It blamed a constrained system for the load shedding, which will continue to persist. This, therefore, brings with it an elevated risk of blackouts over the coming weeks. The power utility, meanwhile, appealed to households to reduce electricity use as the demand for electricity rises.

TUT campus barricaded as protests break out against ‘rogue’ landlords

Meanwhile, pandemonium broke out at the Tshwane University of Technology (TUT) campus in Pretoria west as students protested on Sunday, 19 June.

SABC News reported that the vexed students are decrying apparent poor living conditions. The protesting group is also speaking out against the lack of hot water and the ongoing electricity crisis at their residences.

They barricaded entrances to several residences with burning rubble. In addition, they accused the landlords of failing to pay utilities for months.