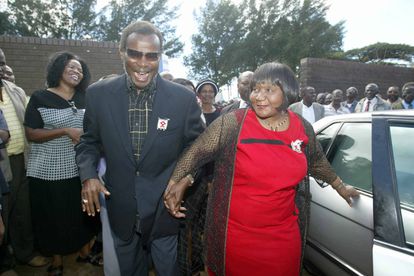 The passing of the beloved wife of Mangosuthu Buthelezi, Princess Irene Audrey Thandekile Buthelezi, was confirmed in a family statement on Monday.

The 89-year-old succumbed to a long-term battle with an illness, the family wrote. The news came after the matriach of the Buthelezi dynasty “passed away peacefully this morning at KwaPhindangene,”.

“She leaves behind her husband of almost 67 years, their children Prince Ntuthukoyezwe Zuzifa, Princess Phumzile Nokuphiwa and Princess Sibuyiselwe Angela, and many grandchildren. All are devastated by this loss.” the family added.

The things Princess Irene will be remembered for

Princess Irene has held the Buthelezi household together, with her husband right next to her, for more than 60 years. Together they have had eight children, five of which — as reported by Times Live — passed away.

The family respectfully asked for a little privacy as they prepared all necessary arrangements for the burial of someone who played a huge role in the life of Buthelezi.

Read – The R90 000 suit Mangosuthu Buthelezi returned to its sender

“We thank our many friends and supporters for their love, prayers and condolences in this painful time. Our greatest solace is in knowing that Princess Irene Buthelezi has been received by her Lord. By His grace, she rests in peace,” the family wrote.

Tributes pour in for the Buthelezi family

Statement from the EFF

Since the news broke out, tributes have poured in. The EFF sent its heartfelt condolences to the family and the supporters of the IFP in these difficult times.

“We wish President Buthelezi comfort as he is also facing one of the most meaningful elections in his political career. We know how special and close his wife of 67 years was to him,” the red berets noted in a statement.

EFF Sends Condolences To The Buthelezis On The Passing Of Princess Irene Audrey Thandekile Buthelezi pic.twitter.com/WoiFoerOQG

Leader of the United Democratic Movement (UDM), Bantu Holomisa, had some words of encouragement for the Buthelezi family.

Princess Irene Buthelezi dies after long illness https://t.co/3Hec7J2o7V via @eNCA Our condolences to Nkosi Buthelezi and his family. This has been a long journey for her, incl to look after Zuzi Ntuthuko & his siblings during difficult period in SA’s history . May her soul RIP. pic.twitter.com/zwyoW0WAg0

Condolences from the DA

John Steenhuisen, on behalf of the Democratic Alliance (DA), also sent his condolences to the family.

Condolences to the leader of @IFPinParliament Prince Mangosuthu Buthelezi and his family on the loss of Princess Irene. You are in our thoughts and prayers at this time.