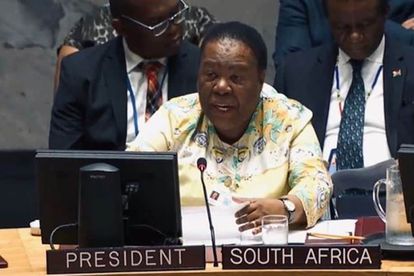 Department of International Relations and Cooperation (DIRCO) Minister, Naledi Pandor, has reiterated Pretoria’s solidarity with the peoples of Palestine and Western Sahara in their quest to achieve “fundamental freedom, equality, justice, and dignity.”

Pandor was speaking during a virtual event commemorating the Declaration on Decolonisation, adopted through the historic UN General Assembly Resolution 1514.

“It is necessary for the international community to uphold international legality in ensuring that the collective decisions of the United Nations and the African Union to end the illegal occupations in Palestine and Western Sahara are respected and fully adhered to.”

Pandor said any decisions contrary to these multilateral collective decisions must be “discouraged and unequivocally disregarded.”

“The inalienable right of people to be free from all forms of colonialist rule and oppression cannot be traded away.”

The Declaration, according to Pandor, is significant for many countries across the world that achieved their independence from colonial rule and occupation.

While the Minister said this was a magnificent milestone, South Africa is reminded that there are currently 17 territories whose people have not yet attained a full measure of self-government across the globe.

She said these regions are on the list of Non-Self-Governing Territories and those on the agenda of the Special Committee on the Situation with regard to the implementation of the Declaration on the Granting of Independence of Colonial Countries and Peoples.

“Noting that there remain people who still await the right to exercise their self-determination, it is incumbent on the international community to ensure that the process of decolonisation is completed in order for all countries to be duly liberated and enjoy their independence and freedom.”

“Completing this mandate will require a continuing dialogue between the administering powers and the peoples in the concerned territories, in accordance with the relevant United Nations decisions on decolonization.”

Pandor said South Africa remains committed to the two-State solution for Palestine and Israel based on international recognition and independence of the State of Palestine premised on the 4 June 1967 borders with East Jerusalem as its capital.

“South Africa reiterates the need for the holding of a referendum for the self-determination of the people of Western Sahara in line with the decisions of both the United Nations and the African Union.”

The settlement plan, as approved by the UN Security Council, provided for a transitional period for the reparation of a referendum in which the people of Western Sahara would vote between independence or integration with Morocco.

URC duel of the week: Vermeulen vs Roos in audition for Springbok No 8 jersey