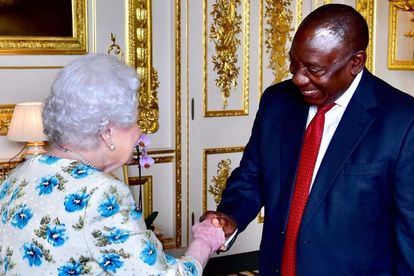 President Cyril Ramaphosa has had quite the busy day in the UK today. From special stops in London to some very important meetings, let us help get you up to speed.

After arriving in London on Tuesday morning, Ramaphosa paid a courtesy call to the Queen of England at Buckingham Palace.

The South African president is in the UK to lead a South African Delegation to the Commonwealth Heads of Government Meeting (CHOGM 2018) under the theme: “Towards a Common Future” between 19th and 20th April 2018.

Read: SA’s new High Commissioner to the UK gets the Queen’s approval

While we have no idea what was spoken about on this “courtesy call”, Ramaphosa and the Queen both looked like they were getting on rather well. Don’t believe us, check out these pictures.

President Cyril Ramaphosa pays a courtesy call on Her Majesty the Queen at the Windsor Castle during a working visit to London to attend the Commonwealth Heads of Government Meeting (CHOGM 2018) taking place on 19-20 April 2018. pic.twitter.com/xP8ExxK672

Queen Elizabeth is not the only powerful woman the president is meeting, though. Ramaphosa will also hold a bilateral meeting with UK Prime Minister Theresa May.

On top of all of that, he will also deliver keynote addresses at the Commonwealth Business Forum banquets, attend CHOGM opening and closing sessions and participate in a number of executive and retreat sessions.

So what is this CHOGM really all about?

According to the South African Presidency, this year’s event is an “opportunity for the marketing and promotion” of South Africa as an investment destination.

“President Ramaphosa will utilize the opportunity to engage with major investors and business leaders based in the United Kingdom.  The President will thus extend an invitation to leading investors and leaders of business to attend the Investment Summit scheduled for later this year,” said Presidential spokesperson Khusela Dicko.

The United Nations will also receive some Ramaphosa attention as the president will lobby for South Africa’s candidature to the UN Security Council for the 2019 – 2020 term.

While the trip may be an important one, it won’t last very long. President Ramaphosa will return to SA on Friday.