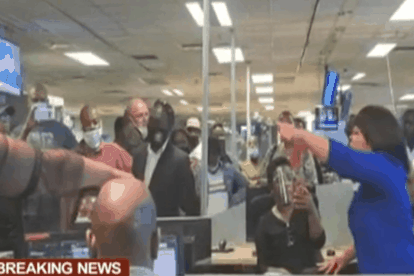 The Police and Prisons Civil Rights Union (Popcru) has added its voice to those strongly opposed to the South African Broadcasting Corporations’ (SABC) decision to forge ahead with its retrenchments. On Tuesday group executive for news and current affairs Phathiswa Magopeni committed to halt the issuing of Section 189 retrenchment letters after a heated exchange with journalists. In the filmed incident ,she assured staffers that she would go back to discuss her decision with the Human Resources department.

In a statement on Wednesday 18 November 2020, Popcru said it was concerning that the SABC has opted to bypass the unions in the whole process..

“This destructive imposition takes place after the SABC board had earlier this year threatened the employment of 600 employees. We are concerned about this reckless manner in which the public broadcaster is acting as full engagements have been bypassed in finding amicable solutions.”

Popcru added that the Public Broadcasters’ conduct undermined the spirit of the Labour Relations Act which compels employers to look for alternatives to retrenchments, and to rather meaningfully engage workers.

However the SABC’s HR accused the Communication Workers Union(CWU) of failing to present alternative solutions to the  financial quagmire.

The SABC is planning to lay off around 400 workers, with 170 positions that they can apply for.

The SABC published its 2019/20 annual report in Parliament on 17 November 2020, which revealed a net loss of R511 million over the last financial year.

Popocru has maintained its support for a process to rescue the State-Owned Entity, however stating that it is against unilateral decisions.

“Though we stand behind efforts to rescue our State-Owned Enterprises (SOEs), we firmly stand against workers being victimised and retrenched while decision-makers are left scot-free for their shortcomings.”

The union said retrenchments are traumatic on both those laid off and those who remain behind.

“The word retrenchment has a traumatic and emotional impact on the still-employed as well as those who have been laid off, and has shown to demotivate remaining employees, which can result in lower productivity within the SABC, especially in the manner with which the SABC wants to impose it.”