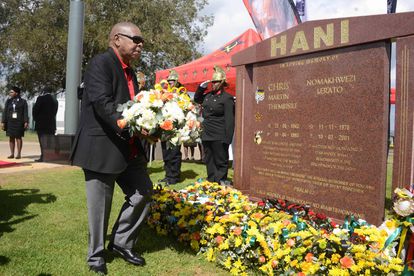 The political landscape of South Africa changed drastically when it was announced that Chris Hani, the late leader of the South African Communist Party (SACP), was assassinated outside his home in Boksburg, 26 years ago.

His death ironically came after he had withdrawn from the Convention for a Democratic South Africa (Codesa) negotiations.

Moreover, it has always been believed that there was a deeper, more sinister, reason behind Hani’s assassination than merely chalking it up to the far right-wing beliefs of the Polish murderer, Janusz Walus.

Alas, 26 years on and the leader’s ideas about South Africa’s democratic future and what its indigenous people deserve have featured greatly in modern politics.

Political parties, on Wednesday, issued statements commemorating the 26th anniversary of Hani’s passing, and these are just some of the messages we found on social media:

EFF vow to carry Hani’s baton on issues of land

The Economic Freedom Fighters (EFF) coined the death of Hani as the catalyst that saw the speedy conclusion of the Codesa negotiations and the realisation of democracy in South Africa.

“Hani was a communist leader who believed that land must be overcome, so that it can be returned to its rightful owners, which is black people. He was unapologetic about the crucial demands of the Freedom Charter, particularly in their radical reading that nationalisation of mines, banks, and other strategic industries must happen for freedom to be meaningful,” the party said in its statement.

The ANC took the opportunity to jump on the bandwagon and use the celebration of Hani’s life to encourage voters to look to President Cyril Ramaphosa for “rooting out corruption & improving service delivery for all.”

Ramaphosa did, however, pay his respects to Hani, describing him as a leader who “was rooted among the masses”.

#ChrisHani was a selfless, uncompromising leader who put the people first. Let us vote for an ANC under the renewed leadership of @CyrilRamaphosa, who is committed to rooting out corruption & improving service delivery for ALL.https://t.co/oEEWThPwXB#RememberingHani #VoteANC pic.twitter.com/Q7WLNOpEby

The general secretary of the SACP, Blade Nzimande, led a keynote address at the Hani commemoration event in Ekurhuleni on Wednesday.

He stated, on record, that the communist party stood against the recent release of Walus.

“We want justice to be done in respect of holding to account every person who was involved or who had prior knowledge of the plan to assassinate Chris Hani and did nothing to stop it,” he charged.