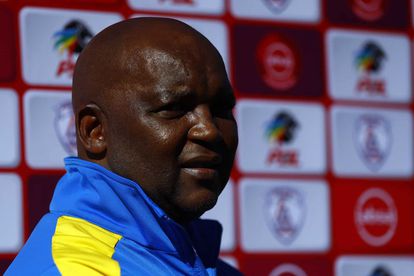 With the start of the 2019/20 PSL season just days away, keen eyes are on Kaizer Chiefs star Khama Billiat, who has been linked with a reunion with former mentor Pitso Mosimane at Mamelodi Sundowns.

The player left the Brazilians at the start of the 2018/19 campaign, joining the Soweto giants, where has quickly become one of the more important players.

His profile has been further elevated by an impressive showing at the recently-concluded Africa Cup of Nations, where he emerged as Zimbabwe’s standout player – sparking reported interest from one of the continent’s most successful clubs, Al-Ahly from Egypt.

However, it is reported that the 29-year-old declined big money from the North African giants, opting to stay at his new club – but rumours suggesting that the nine-time PSL champions are staging what could be the ongoing transfer window’s biggest coup have picked up over the past week.

Speaking at the PSL 2019/20 season launch on Monday, Mosimane could not avoid questions about Billiat’s possible return to Sundowns, and did not offer much in response – besides stating that “everybody has a price”.

“I need to respect Chiefs, a big institution. And the league will fine me if they complain, that I am poaching their players. If we want Khama, then what we need to do is speak club to club – you know the story. And they will say whether they are selling or not.

“Even (Lionel) Messi has got a price, let’s be honest. If anyone comes to me and says they will give me $1 million net, I am gone.

In his first season at Kaizer Chiefs, Billiat finished with nine goals and ten assists. This was after contributing to 90 goals in five seasons at Mamelodi Sundowns.