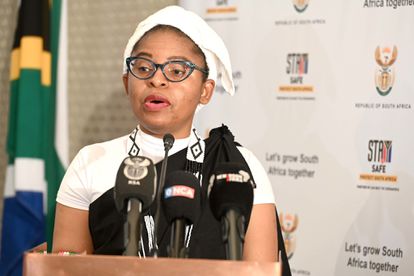 Acting Minister in the Presidency, Khumbudzo Ntshavheni, said additional arrests related to the killings that occurred in Phoenix, KwaZulu-Natal during the unrest last week have been made. Nthsavheni was speaking at another security update on Friday, 23 July. The briefings have become a regular occurrence since the violence broke out.

Nthsavheni said five more people were arrested for the unrest-related murders in Phoenix, bringing the total arrests for the murders in the province to 20.

“There are no new updates on the arrests of the instigators and key role players in the unrests,” said the minister.

The death toll of the unrest remained the same in Gauteng at 79 while in KwaZulu-Natal the number was reduced from 258 to 251. This is because “some deaths were previously included were not related to the unrests,” according to Ntshavheni.

“The number of deaths is revised when there is positive confirmation of deaths as related to the incidents and when those who were injured succumb to their injuries,” said Ntshavheni.

There have been calls for a commission of inquiry into the violence but Ntshavheni said that this would not be necessary because law enforcement authorities feel confident that they are aware of the facts and do not need a commission to uncover anything.

“The police and law enforcement agencies, in general, feel confident that they are fully aware of the facts at hand and they will be able to hold those accountable to be held liable,” said Ntshavheni.

Nthsvheni said her security update briefings will be a weekly occurrence from here on as the situation in KZN and Gauteng has stabilised.