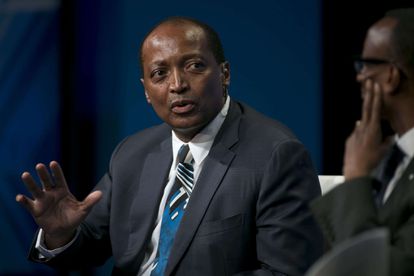 The Motsepe Foundation has donated R30 million to flood relief efforts in KwaZulu-Natal (KZN) after the province was battered by heavy rains earlier this week.

The damage caused by the floods is estimated to be over R750 million. At least 395 people have died.

CAF President, businessman and Motsepe Foundation Founder, Patrice Motsepe was in Tshelimnyama on Saturday to assess the damage and also visited flood victims in parts of KZN.

“The plan is that there will be a committee that will be under the leadership of King-elect, Misuzulu kaZwelithini.

“His Majesty as well as other traditional leaders and faith based organisations will identify how best the donation will be used.”

Motsepe’s wife, Dr Precious Moloi-Motsepe said they will ensure that there is a balance in how the funds get to the people.

“The most needy are our priority, while ensuring that we address issues of water, sanitation. We have also been working on putting up boreholes and JoJo tanks for the community,” Motsepe-Moloi said.

In a TV interview, Finance Minister, Enoch Godongwana said that R1 billion in relief funds will be available to KZN by next Tuesday.

Godongwana explained that there are two phases to the disaster process. The first one being emergency relief.

“The second phase is going to be when we do recover and repair. That’s going to require a significant amount from treasury. That is difficult to quantify until some work is done. However, the minimum will be a billion rand. Starting from Friday will receive a few requests and I think the money will flow to those respective departments by Tuesday.”