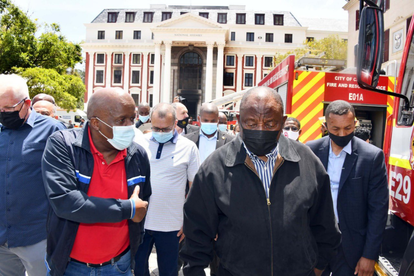 The ATM has levied serious allegations after the fire at Parliament. Image: Presidency/ Twitter

The ATM has levied serious allegations after the fire at Parliament. Image: Presidency/ Twitter

The African Transformation Movement has called for a multi party committee to investigate the ‘suspicious burning’ of Parliament after a fire devastated the historical site on Sunday.

In an official statement issued by the party in response to the incident, the ATM highlighted that it feels everything isn’t as it seems.

Certainly, the party wasted no time dropping allegations that the ANC itself may well be behind the incident.

“The ATM has noted the burning of Parliament with great suspicion. We trust that this is not another calculated shenanigan to issue unnecessary so-called emergency tenders for refurbishments, private hosting of the Opening of Parliament or an attempt to scupper the inevitable Secret Ballot for No Confidence Motion in Ramaphosa.”

The ATM continued by claiming that COVID-19 infections declining would lead to Parliament resuming as normal, something the party insists Ramaphosa and the ANC wouldn’t want.

” With COVID-19 hospitalisations on the decline and relaxation of COVID-19 regulations, it is becoming clear that the normal operations of Parliament were about to resume where Ramaphosa and his executive would be held accountable for misgoverning the country.”

Interestingly, the ATM party pointed out that the nation had been hours away from viewing the State Capture Inquiry report.

“Furthermore, it is suspicious that this happens on the eve of Parliament receiving the State of Capture Report where Ramaphosa, the ANC and a few members of Parliament are implicated.”

In conclusion, the ATM reiterated its opinion that an independent probe would be the only way to learn what the true cause of the Parliament fire had been.

“A multi party team should be appointed as a matter of urgency to get to the bottom of this strange and suspicious first-time occurence. The ATM has no confidence in our Intelligence Services and thus this matter cannot be left solely in their hands.”