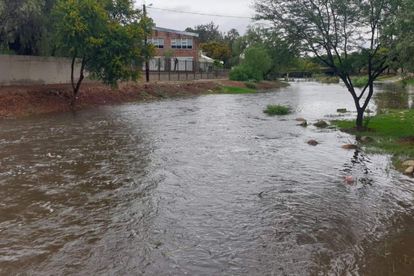 Oudtshoorn and surrounding towns in the Klein Karoo have welcomed a steady wave of rainfall which washed over the parched landscape this past weekend.

As South Africa continues to battle a debilitating drought, which has been especially harsh on communities in the arid Karoo, a weekend of torrential rainfall has afforded small towns a welcomed reprieve.

Cloud bursts in the Karoo, which began on Friday 17 January, persisted throughout the weekend, resulting in torrents of sacred water flowing through once-barren riverbeds and into thirsty dams.

According to Oudtshoorn Municipality senior manager for water and sewerage Chris Swart, rain in excess of 50mm soaked vital catchment areas and raised dam levels by almost 4%. Speaking about the rainfall and its impact on the Koos Raubenheimer Dam, which is fed by the Grobbelaars River, Swart said:

“The dam level at that stage has risen from 39.7% on Friday to just over 43% and water is still flowing in strongly into the dam.”

The sudden increase in dam levels serves as a major boost to the area’s agricultural prospects, especially in light of sharp decreases despite good rainfall earlier in January. Last week, the town experienced its first major heat wave of 2020, with temperatures soaring to 45 degrees Celsius.

Luckily, the heat wave, which came with a warning from the South African Weather Service (SAWS), was broken by rainfall and thunderstorms.

The deluge, which was fortunately intensely focused on catchment areas, did lead to road closures in Oudtshoorn, with streets adjacent to the Grobblelaars River being submerged. Still, while road closures and electrical disruptions were reported, flash flooding, which occurred earlier in January, was kept at bay.

According to the municipality’s disaster management team, no severe damages were reported as a result of overflowing rivers.

SAWS reports that isolated showers are expected to continue to quench the thirst of Oudtshoorn and surrounding areas for the first half of the week. The weather is expected to clear on Thursday 23 January.