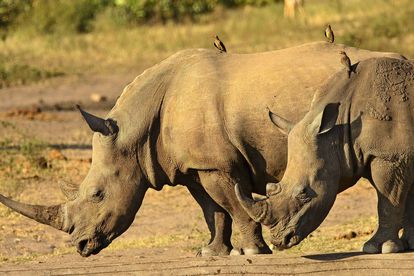 In yet another massive bust by officials, the South African Revenue Service (Sars) seized rhino horn worth a staggering R115.6 million at the OR Tambo International Airport.

During a physical inspection of the consignment, customs officials discovered six boxes containing 41 pieces of rhino horn, which had been concealed in carbon paper and foil and wrapped in traditional material, according to Sars.

Sars said the consignment of six boxes, containing the horns that had been concealed in carbon paper and foil, was destined for Kuala Lampur in Malaysia.

In a separate incident, Sars customs officials also found abalone valued at close to R1 million, destined for Hong Kong, and ephedrine valued at R600 000, which had been hidden in two printer cartridges and destined for Madagascar.

“Criminal and illicit economic activities are rife and result in billions of Rands of losses in tax and customs revenue to the fiscus. In addition, it does seriously harm to our domestic economy. I am therefore very pleased with the success at ORTIA by our customs officials”, Kieswetter said.

“I wish to express sincere appreciation to our customs officers for this diligence in fighting these unacceptable criminal activities,” he added.

Kieswetter has also issued a stern warning to those who are engaged in criminal syndicate work.

“We will spare no effort in confronting and dealing with any criminal acts that threatens the well-being of our country and depriving our future generation from witnessing the beauty of nature as represented by our rhinoceros. We will not rest until all are caught,” he said.

The latest incident comes as government said its efforts to curb rhino poaching were yielding some results as the number of rhinos killed every year in the country had gone down.

South Africa has one of the world’s largest rhino populations and is battling organised crime syndicates targeting national and private parks for the rhino horn, which is a prized resource in the Asian market.

“We will redouble our efforts to make sure that communities who live on the borders of our parks benefit from conservation and the biodiversity economy so they are not vulnerable to recruitment by syndicated poaching operations”, said Environment, Forestry and Fisheries Minister Barbara Creecy.