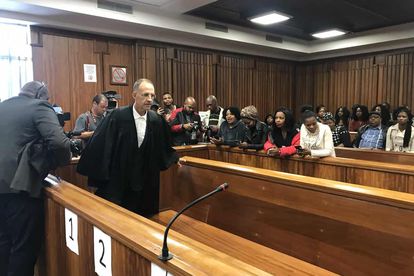 We’ve had a very dramatic day in court at the Timothy Omotoso trial, where defence lawyer Peter Daubermann has sensationally asked to be recused from the case.

Essentially, Daubermann is asking to be excused from representing the pastor accused of sexual assault. But this is no change of heart – the advocate merely feels that there’s no longer a chance of a fair trial, citing the fact that both he and defence witnesses have been intimidated this week.

Daubermann applied to have Judge Mandela Makuala recused, as well. He feels that the conduct from the presiding magistrate has not been completely neutral and that Makuala has shown sympathetic tendencies towards the alleged victims:

Daubermann now cites Omotoso’s reasons for the application to have Jugde Makuala to recuse himself. This application is based on Makaula’s statement to Cheryl Zondi where he wished her luck for her upcoming exam last week Wednesday .#TimothyOmotoso #OmotosoTrial

What a hectic start to week two in the Omotoso trial. Peter Daubermann, the lawyer representing the accused pastor, began Monday morning with a tirade about the case so far.

The advocate found himself as South Africa’s pantomime villain over the past week, following an intense line of questioning and “invasive” inquiries into the trial’s first witness, Cheryl Zondi. However, some of the terms levelled his way have not gone down well with the barking Daubermann.

He rallied against the media coverage of events unfolding in Port Elizabeth, saying reports of him being “reprimanded” by the judge were completely false. Daubermann was stopped in his tracks by Mandela Makaula twice on Tuesday but received no formal warnings.

“I’ve been accused of adopting questionable methods of examination. That is blatantly false. The judge has not ‘reprimanded’ me on any occasion. He disallowed just two of my questions during three days of my cross-examination.”

“One question I asked was about the depth of penetration – I need to revisit it now – I did ask the witness about this. But what was not reported was that the witness herself put that fact on the table.”

Will Timothy Omotoso get a fair trial?

The lawyer for Omotoso isn’t just enraged by what’s being said about him, though. He also claims that two of the co-accused – Zukiswa Sitho and Lusanda Sulani – are not prepared to come to court until more guarantees over their safety are provided.

On Wednesday, Peter Daubermann himself was hounded by angry crowds outside of the court. Over the weekend, protesters turned up at Omotoso’s church and managed to shut the facility down. Omotoso’s representative believes his client is “unable” to get a fair trial:

“The complainant gave a harrowing account of sexual assault. My job is to proceed on the basis that her accusations are false. It’s for your lordship to decide where the truth lies. I have to test the veracity of the evidence. I can’t allow sensibilities tog et in the way of my duty.’

“The difficulty I face is that I’m being intimidated, limiting me from doing my duty for the client in the court. This amounts to a direct attack on the judicial system in this country.”

“No-one in an official capacity has condemned this attack. We are being threatened and assaulted, it isn’t safe for us to come to court. I feel there’s no possibility of the accused receiving a fair trial here. It is the job of the judge to ensure a defendant receives a fair trial.”

Judge Makuala remained unperturbed during Daubermann’s pleas and asked him to stop focusing on media reports which have no bearing on actions inside the court. A second witness is due to testify later this week, after the trial was postponed to Thursday 25 October.

Judge says he’s not reading the newspapers or watching the news do it won’t tamper with this case. This case has a public interest, it’s been broadcast live. When I have a concern I callcouncil to the chambers. When their is a problem Council must thrash it out #eNCA #Omotoso