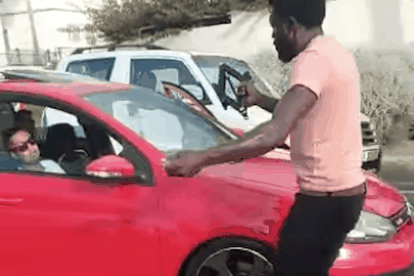 There was no love lost on Valentine’s Day down in Sea Point this year, after a disagreement between two motorists took a very violent turn. Put it this way, they weren’t exchanging cards, as road rage got the better of these citizens.

Crowds eventually swarmed around the duelling drivers, and the incident culminated when a tyre jack was used to try and smash the window of one of the vehicles involved. Police arrived on the scene shortly afterwards, as one of the main routes flowing through Sea Point was jammed with concerned bystanders and bemused commuters.

The situation eventually calmed, and no serious injuries have been reported. However, the menacing attempt to use a weapon has left several social media users spooked. It’s understood that an Uber driver got into an altercation with the occupants of the red car – because he was ‘driving too slowly’.

He was then overtaken by the passenger motor, only for the Uber to weave its way back in front. The e-hailing motorist confronted his antagonists and got hit by a loose license plate – sparking this response with the scissor jack:

Apparently an Uber Driver was attacked in Cape Town at Sea Point and he retaliated. pic.twitter.com/wMzmLwUtv6

No love lost on Valentine’s Day, as road rage conquers all

The incident slipped further into anarchy, when horrendous exchanges were heard between both parties. Casual xenophobia – which involved the Uber driver being told he ‘does not belong’ in South Africa – was reported when a second video got uploaded online. Social media users were less than impressed with both the conduct and the language on show:

Why do people always say you don't belong here after fighting with man from another African country ???? how do you know he doesn't belong here? Mense soma think they work for home affairs once they enter sea Point????