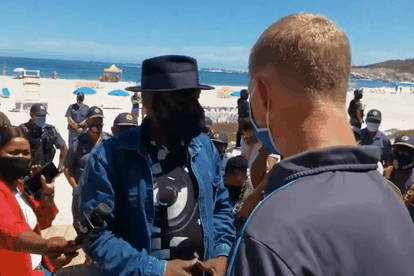 Bheki Cele embarked on a nine-stop beach tour of Cape Town during Wednesday’s public holiday, as he carried out spot-checks for COVID-19 compliance. Following a serene morning in False Bay, the police minister showed up at Camps Bay, where the temperature increased slightly during his impromptu patrol.

Life’s a beach for the police minister

A flock of media representatives covered the visit, as Cele was mobbed by cameras and journalists. He spent the afternoon ensuring that masks were being worn, and social distancing laws were being respected. But when ‘The General’ came across a film crew shooting a commercial, his jovial tone changed dramatically.

Multimedia journalist Sisonke Mlamla captured the moment where Minister Cele and a representative from the production team butted heads. The politician could be heard telling the man that he was ‘breaking the law’, and filming would have to be shutdown. However, the accused stood his ground, confirming that his crew had permission to film in the area.

The argument ended amicably, with Bheki Cele saying that both parties would ‘sit down and work something out’.

Watch: Bheki Cele has it out with Camps Bay film crew

@SAPoliceService minister Bheki Cele has called off a commercial filmed at Camps Bay Beach in Cape Town. The commercial organisers said they were given a permit by the @CityofCT.

Only the Garden Route has been forced to close its beaches in the province, whereas the Eastern Cape and KwaZulu-Natal are facing full-scale lockdowns – although, KZN is merely subjected to ‘intermittent measures’. During his walkabout, Bheki Cele made it very clear to the assembled press that the Western Cape is not ‘above the law’:

“It is very clear and everyone knows that we have the option to close beaches if we see non-compliance. There could also be partial closures. I am here today to report back to the National Coronavirus Command Council (NCCC) to tell them what I have found during my visit to these beaches.”

[WATCH] Police Minister Gen Bheki Cele now in Camps Bay as he continues his spot checks on the @CityofCT #beaches, which has be are open until 6pm under the revised #COVID19 regulations. Cele says he will report back to the NCCC on what he finds during his visit here. pic.twitter.com/2IxAmm75vR

Bheki Cele is so friendly with abelungu at the beaches in CT pic.twitter.com/QdkgNU8gn1