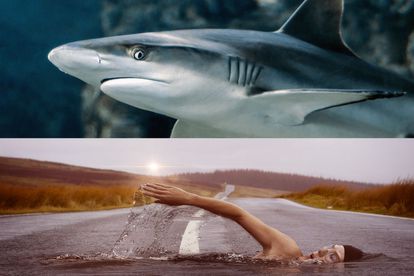 A Florida man filmed a shark in his neighbour’s backyard during recent Hurricane Ian. Images: Pixabay.

A Florida man filmed a shark in his neighbour’s backyard during recent Hurricane Ian. Images: Pixabay.

A shark – or any other sea creature that does not belong there – in the street is quite a common hoax when the United States is blasted by storms and streets flood.

However, experts seem to be convinced that a Florida man captured the real deal on Wednesday, 28 September, while Hurricane Ian was battering the state’s southwest.

‘I DIDN’T KNOW WHAT IT WAS’

According to the Associated Press (AP), Dominic Cameratta filmed a large dark fish with shark-like dorsal fins splashing in a flooded backyard in Fort Myers.

The video clip found its way to Twitter and subsequently went viral, racking up millions of views. Cameratta, who is a local real estate developer, said he filmed the clip from the patio in his backyard on Wednesday morning when he noticed something flopping around next door.

EXPERTS BELIEVE IT IS A SHARK

Experts were unconvinced initially and said the fish looked like a juvenile shark but it was hard to tell. Leslie Guelcher, a professor of intelligence studies at Mercyhurst University in Pennsylvania, was one of them.

Later, it was revealed that the clip was filmed near a retention pond from which the street shark may have swum.

“It makes a bit more sense from a flooding standpoint but how on earth would a shark go from the Gulf of Mexico to a retention pond?” she conceded in an email to AP.

Jane Lytvynenko, a reporter who said she’s spent approximately “half a decade” debunking shark hoaxes whenever there is a flood or hurricane, also believes the clip is genuine. “I can’t believe I’m looking at an honest-to-god street shark. Good to finally meet you, pal,” she wrote on Twitter.

A marine biologist who specialises in shark behaviour at Florida International University, Yannis Papastamatiou, told AP that most sharks flee shallow bays ahead of hurricanes. He said a shark could have accidentally swum into the creek or been washed into it.

“Assuming the location and date attributes are correct, it is likely this shark was swept shoreward with the rising seas,” said George Burgess, a former director of the Florida Museum of Natural History’s shark program.