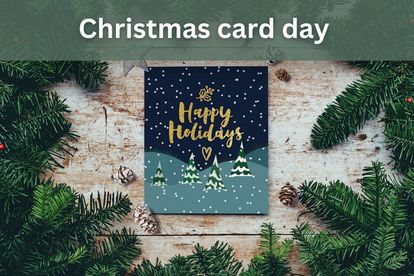 National Christmas card day is celebrated on 9 December, and what better way to celebrate than grabbing some stationary and making your own cards?

The history of Christmas card day

Sir Henry Cole, a civil servant who was responsible for the idea of sending greetings scribbled into the now familiar cards we get around the season of good cheer, created the first commercial Christmas card in England in 1843.

The first commercial card depicted a family raising a toast, and designs depicting flowers, or the promise of spring were popular the following year.

In 1874, the lithograph firm Prang and Mayer began selling their cards.

These frequently featured children or cartoon animals, across the Atlantic to America.

Prang and Mayer were printing five million cards per year by 1880.

With so many different designs, shapes, and sizes, some Christmas cards have become collector’s items.

They have been known to sell for high prices at auctions.

Seasonal cards are now sent all over the world in thousands of different designs.

The most popular messages you’ll find inside a Christmas card are ‘seasons greetings’ and ‘merry Christmas, and a happy new year’ – but many also stick to religious roots by featuring a short biblical verse or a religious blessing.

If Christmas card day is not your cup of tea, here are a few other days celebrated on 9 December:

No matter how you decide to celebrate, remember to make the most of this day!

ALSO READ: Days of the year: It is national brownie day!