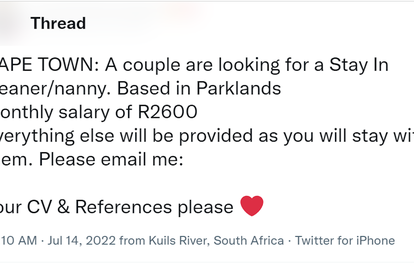 This ain’t it, man! A Cape Town couple received an intense backlash on Thursday morning, after they posted a job-ad for a domestic worker that was so shocking, some social media users compared the terms to slave labour.

Certainly, the position being advertised is not far off. The monthly salary offer of R2 600 works out to be a fee of less than R84 per day. In fact, the whole package is more than R1 100 cheaper than the legal requirement for minimum wage.

The role is also branded as a stay-in cleaner/nanny – implying that the not-so-fortunate winning candidate would essentially be taking on two jobs, for an extremely small pay packet, while having to remain in a home that is not theirs. There really isn’t much appetising about this deal…

CAPE TOWN: A couple are looking for a Stay In cleaner/nanny. Based in Parklands
Monthly salary of R2600
Everything else will be provided as you will stay with them. Please email me: Amymashinini@gmail.com if you are interested
Your CV & References please ❤️

Veteran broadcaster Robin Adams also came across the posr. He blasted the salary offer as ‘pathetic’, arguing that the misery would also be compounded by the fact this domestic worker would ‘still be doing the dishes’ long into the evening, given the dual roles advertised.

“Ja nay. This is Cape Town and its pathetic salaries for you. In this case they want the nanny to stay on-site. So it could never be an 8:00 – 16:00 job. You’ll be doing dishes after Arendsvlei still.”

The advertiser has also got it in the neck, after they decided it was worthwhile to publish the offer. Although the company promoting the ad says that this is all the couple can afford, sympathy remains in short supply.

Can’t decide what’s crazier, the couple for trying to partake in modern day slavery and exploitation or you for advertising this nonsense with your chest. Are you not embarrassed? https://t.co/Z39Wq5mE9a