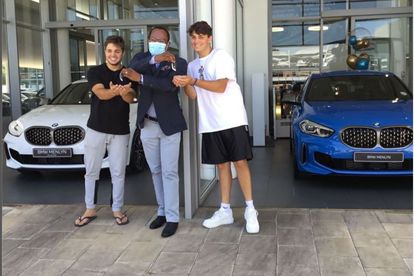 It was Matric results time this week and that meant lots of celebrations and lots of tears too. This story is all about the celebration side. A post showing how two Matric learners were gifted LUXURY BMWs for passing, is getting a ton of attention on social media. While some of us got a gift or reward for passing Matric, the gifting of two R800 000 cars is not quite the norm.

Social media has its pros and cons and certainly gets people talking. A screenshot of an Instagram post from a car dealership has sent Twitter into a frenzy.
A post from Edward Makwana showed two brothers getting “surprised” with BMW M135i cars from their parents. The young men collected their cars from BMW Menlyn, which also posted about the event.

The photos quickly got people talking. The reactions were mixed. But that’s somewhat understandable. We would also be upset if we couldn’t get a free BMW as part of our Matric certificate. Within minutes, people were absolutely tearing into each other online.

Others weren’t convinced by that argument though. @Mgilijaccc responded. “Their parents have land which was repossessed from our forefathers through genocide.”

But while some were saying it is white privilege at its peak. Others said that these gifts have nothing to do with race. As a result, the term “money privilege” was used.

Aside from the money topic. Some also took issue with buying such luxury sporty cars for youngsters that have only just got their licenses.

Whether you’re in favour of these particular gifts or not, we know one thing. EVERYONE would love to be those two brothers right now.