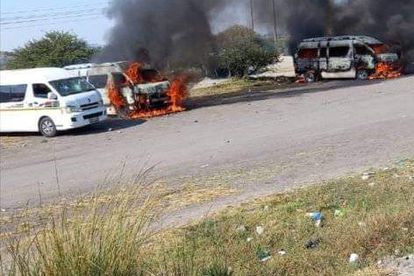 Community members burnt down taxis in the North West.
Photo:Twitter/@sa_crime.

Community members burnt down taxis in the North West.
Photo:Twitter/@sa_crime.

Taxi drivers reportedly stopped vehicles with more than three occupants on their way from town to work forcing community members to use taxis.

Taxi drivers allegedly stopped miners from Siza Shaft,  Bleskop in Rustenburg on their way to work, who were using their own vehicles.

The community retaliated by burning taxis on Friday, 15 May.

It is not clear how many taxis were burnt and the association they belong to.

“It is high time people start standing up for taxi drivers that think they own commuters in this country, last time a taxi driver was shot in Limpopo for fighting someone for giving a lady a lift, I said there we go, taxi drivers must know their place,” @kabelodick tweeted.

“First it was the president at the cosatu mayday gig, now the taxi drivers… North West is fixing the country man,” @Kagiso_Geiger also tweeted.

Meanwhile, Ramotse Primary School in Luka Village near Rustenburg in the North West was up in flames.

North West Department of Education spokesperson, Elias Malindi said the cause of the fire is still unknown but the school community suspected that it was criminal activities.

The fire destroyed a computer lab with 40 computers, photocopiers, printers, Mathematics lab (1 projector,  one screen, manipulative cupboard, interactive board and 18 tables), National School Nutrition Programme storage (food for learners) and Learner Teaching Supply Material (Stationery and textbooks) and a block of toilets for the girls and boys.

“These incidents are aimed at destroying the right to education enshrined by the South African Constitution. We wish the full might of the law to find those responsible and send them to jail where they belong.” Matsemela said.