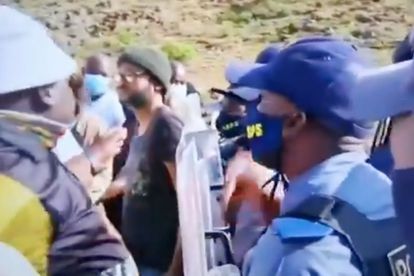 Police trying to control the crowd in Nkandla.

Police trying to control the crowd in Nkandla.

The Economic Freedom Fighters (EFF) have applauded the South African Police Service (SAPS) for not intervening while thousands of former President Jacob Zuma’s supporters gathered at his home in Nkandla on Sunday, flouting lockdown laws in the process.

Widespread criticism was levelled against Police Minister Bheki Cele and police members for not acting to prevent the gathering, but the EFF supported Cele’s claim that the lack of action was aimed at ensuring that matters did not escalate.

In a statement released on Monday 5 July, the EFF said that SAPS had exercised “discipline and restraint” at Nkandla, and had not been tempted to act recklessly due to pressure from the public, many of whom were shocked by the degree to which social distancing and gathering restrictions were abandoned with impunity.

“Despite reported provocation, and nauseating calls by bloodthirsty racists and their agents on social media, the police at Nkandla handled the situation in a manner that must be applauded, avoiding violence and loss of life,” they said.

“It is this calibre of policing that must underpin the attitude of all law enforcement agencies. When confronted by political dissent and protests, all SAPS Departments must resist the urge to inflict violence against protesters under the guise of upholding the law.”

‘Demands for black on black violence must be ignored’

Earlier on Monday, Cele said that police were required to act tentatively when confronted with the situation in order to avoid a “Marikana moment”. The EFF said that they conducted themselves with grace.

“The law does not demand of the police to exercise brutality, rather, police must be strategic and prioritise the lives of people above cheap attempts of proving their strength and authority. The actions of SAPS in Nkandla were decisive, considered and mean that the nation avoided another Marikana moment,” they said.

“SAPS must continue to ignore the desperate demands for black on black violence, and the spilling of blood of black people, by those who seek to suppress the political views of their opponents.”