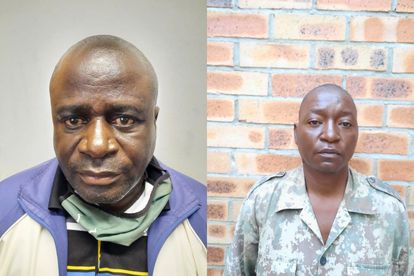 A pair of Kruger National Park field rangers had their day in court on Monday after police arrested them for allegedly helping rhino poaching syndicates. Photos: Hawks

A pair of Kruger National Park field rangers had their day in court on Monday after police arrested them for allegedly helping rhino poaching syndicates. Photos: Hawks

In an unfortunate tale, those who were entrusted to protect the wildlife of Kruger National Park were arrested and charged by police with corruption, money laundering and fraud linked to wildlife trafficking. Two rangers appeared in the Skukuza Magistrate’s Court on Monday.

“The suspects aged 56 and 60 appeared in the Bushbuckridge Magistrates’ Court on Monday after they were arrested over the weekend in Skukuza and charged with corruption, money laundering and fraud linked to wildlife trafficking,”

“The arrest follows a comprehensive investigation which included their financial affairs. It is alleged that the suspects provided tactical information to rhino poaching syndicates in exchange for large sums of money,”

Daniel Chikwa Maluleke and Solly Ubisi were remanded into police custody by the Skukuza Magistrate’s Court after their appearance on Monday,

Although two field rangers are in court for assisting poachers, others uphold their duties and work with the police.

“The alleged intruders were spotted by field rangers and a search was instituted where resources were mobilized, including a tracker dog and a helicopter. Finally, two male suspects were sniffed out of their hiding place in the thick bushes at around 13:30. Two bags, a knife, and a hunting rifle with a silencer as well as live ammunition were confiscated,”

Park officials then notified the police at Skukuza who upon their arrival arrested and charged the two suspects for possession of an unlicensed firearm with ammunition, and for possession of a dangerous weapon as well as trespassing.

“The suspects have since been identified as Patrick Nguntshane and Freddie Mahlaule who is originally from the country of Mozambique hence police are working with the Home Affairs Department to determine his status in the country and more charges could be added. Their case was postponed for further investigation meanwhile they remain in custody,”