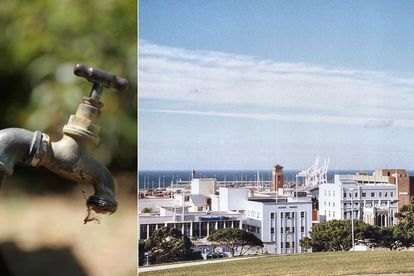 Over 100 areas across Nelson Mandela Bay will be without water by June due to low levels in storage dams. Photo: Owen McIver and Raúl Alejandro Rodríguez / Flickr

Over 100 areas across Nelson Mandela Bay will be without water by June due to low levels in storage dams. Photo: Owen McIver and Raúl Alejandro Rodríguez / Flickr

Consumption in the Nelson Mandela Bay area needs to be cut

A statement released on Wednesday, 4 May, indicated that unless water consumption could be cut by 50 megalitres per day, the aforementioned scenario will become reality. Water and Sanitation Director Barry Martin explained that there is not a sufficient supply of water at the current rate of consumption.

“Even with the successful expansion of the Nooitgedacht treatment works there is not enough water at the current rate of consumption to allow us to distribute supply to these 107 suburbs, which constitute 40% of the metro. In 38 days we will no longer be able to deliver to this area, which includes the western suburbs, the Uitenhage-KwaNobuhle area and peri-urban parts like Greenbushes, where the St Albans Correctional Services Facility, one of the biggest prisons in the Eastern Cape, is situated,”

Martin described the situation as ‘precarious’. He touched on topics regarding services such as firefighting, that require water to continue. The director said that residents need to urgently reduce their consumption.

“We have no choice but to urgently reduce our consumption. Then we need to go down on our knees and pray,”

There is not enough water supply in the storage dams

Martin’s presentation to councillors was leaked to The Herald. He told councillors that there is just 2.53% of water left altogether from the western storage dams that can be extracted for human consumption.

Based on current consumption, Martin revealed that dams in the area were dropping an average of 0.06% per day. To add to this, below-average rainfall has been predicted for the area for the next four months.

However, there is a semblance of relief. An extra 30 megalitres a day will be delivered by the Coega Kop, St George’s, Bushy Park and Moregrove boreholes. Unfortunately, this will only be after July/August when they are completed.

Water-shedding is NOT an option

Speaking about other avenues, Martin revealed that water-shedding was not an option. He explained that it would result in a distorted supply to both high-lying and low-lying areas when valves are closed.

He further explained that this option would compromise the quality of supply due to the velocity at which it would move through the pipes.

Martin said the best option was to deploy tankers and install collection points.

These are the areas impacted by the water supply interruptions

‘Umkhokha’ actress Hope Mbhele opens up about her ‘Uzalo’ role

Kaizer Chiefs set to be dealt another transfer blow!