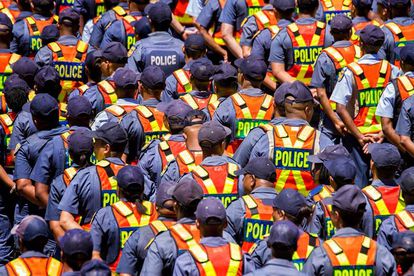 The National Joint Operational and Intelligence Structure (NATJOINTS) said it has not confirmed the veracity of any threats to the country. The US Embassy and other foreign missions warned of a potential terrorist attack in Sandton this weekend.

NATJOINTS PROMISES SA WILL BE SAFE THIS WEEKEND

NATJOINTS is made up of various structures including the State Security Agency (SSA), police service and SA National Defence Force (SANDF).

The structure is responsible for ensuring the safety and security of all major sporting, cultural and recreational events.

South Africa will have more than 500 events from 28 to 30 October and more than 200 of them will be held in Gauteng.

“The US threat alert comes at a time when heightened law enforcement visibility and targeted operations are already in place as part of the Safer Festive Season Campaign which started on 15 October 2022.”

NATJOINTS said there will be heightened police visibility, road blocks and search and seizure operations and the public should expect delays when going to venues and other strategic points.

The Structure has counter-intelligence measures in place to assess and deal with terrorism threats.

“NATJOINTS can give the assurance that the intelligence community diligently follows up on any information at hand but has not confirmed the veracity of any threat at this stage in time. Security agencies remain on high alert.”

The embassy said the US government received information that terrorists may be planning to attack large gatherings of people at an unspecified location in the Sandton area on Saturday. However, it could offer no information about the method, timing or target of the potential attack.

The State said it was concerned about false or misleading messages on social media that speculated about the potential targets of the attacks and discouraged the public from sharing information that could cause unnecessary panic and alarm.