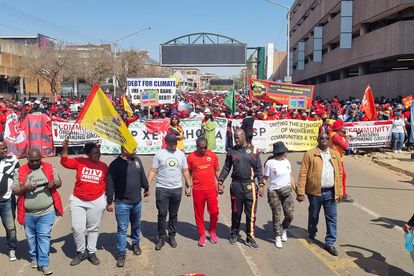 SAFTU members marching to the Union Buildings in Pretoria. Image via Twitter/@SAFTU_media.

SAFTU members marching to the Union Buildings in Pretoria. Image via Twitter/@SAFTU_media.

This was revealed during the Gauteng leg of the National Shutdown on Wednesday, 24 August as thousands of demonstrators took to the streets of Pretoria in Gauteng to hand over a memorandum at the Union Buildings. The unions had cited the high cost of living and rampant unemployment as the reasons for the protected strike.

Despite difficulties to agree on a joint address in the beginning, COSATU and SAFTU eventually agreed and called for the government to meet their demands if it still wants the working class to vote for them. COSATU which is in the tripartite alliance with the ANC and SACP is one of the biggest trade unions boasting a large number of members throughout the country.

COSATU first deputy president Mike Shingange criticised the government for what he labelled as failure to meet the working class’s needs amidst tough economic times. He also slammed the 2% increment offered by government.

A number of speakers from various unions also shared the same sentiments saying it is easy for government to increase Ministers’ salaries, however, it is always an issue whenever the working class is seeking increments in order to afford.

SAFTU General Secretary, Zwelinzima Vavi also criticised the government for how social issues are dealt with and load shedding amongst others.

SAFTU General Secretary, Zwelinzima Vavi said for 15 years South Africans have been subject to load shedding because of at least three things which are:

1) The aim to privatise Eskom has led to a deliberate engineering of a crisis that undermined the building of internal generation capacity so the grid could contribute to economic growth.

2) Slow steps in expanding the generation and distribution capacity of Eskom. “The state was increasingly taken over by a kleptocratic clique of comprador bourgeoisie, who having been shunned by traditional colonial capital (white monopoly capital) and have looted Eskom for their own means.

3) Failure to add solar, wind and storage to stabilise the grid which leads to load reduction, especially in townships.

The former COSATU General Secretary also called for workers to unite and not compromise on their demand for a salary increment.

“The president who was already earning R2.9 million a year got an increase of 3% which is backdated to April 2021. We want a minimum of 8% and we should not compromise on that,” Vavi told the workers.