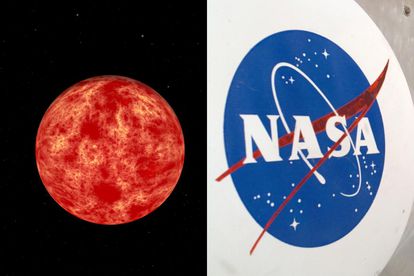 NASA is studying planet 55 Cancri e which is so close to its star that its clouds rain lava and has rivers of fire, Photos: NASA

NASA is studying planet 55 Cancri e which is so close to its star that its clouds rain lava and has rivers of fire, Photos: NASA

NASA’s James Webb Space Telescope is expected to give us images of “Hell”. The “super-Earth” planet known as 55 Cancri e is so close to its star that it bears an eery resemblance to descriptions of Christianity’s hell.

NASA TO REVEAL THE SURFACE OF “HELL”

According to NASA, full-colour images and spectroscopic data from the James Webb Space Telescope will be released for the first time on 12 July.

For now, all humanity has at the moment are artistic renderings, hypothetical visualisations and theories about the surface of 55 Cancri e.

Clouds raining lava, lakes of molten lava, gravity has locked one hemisphere in endless darkness while the other is constantly in searing daylight.

The planet, of nightmarish description, is about 41 light-years away from Earth. Although NASA’s data shows 55 Cancri e is less than about 2.4 million kilometres away from its star.

The space agency says the planet has surface temperatures far above the melting point of typical rock-forming minerals.

“Imagine if Earth were much, much closer to the Sun. So close that an entire year lasts only a few hours. So close that gravity has locked one hemisphere in permanent searing daylight and the other in endless darkness. So close that the oceans boil away, rocks begin to melt, and the clouds rain lava,”

Nothing like it exists in our solar system, NASA says.

NASA is hoping to discover if the planet is “tidally locked, with one side facing the star at all times” or if 55 Cancri e rotates in a way it creates day and night.

The less powerful Spitzer Space Telescope from NASA strangely shows the hottest spot on the planet is not the part directly facing its star.

One theory from NASA is that the planet has “a dynamic atmosphere that moves heat around”.

Although another theory is that 55 Cancri e rotates to create day and night in a hellish manner.

“In this scenario, the surface would heat up, melt, and even vaporize during the day, forming a very thin atmosphere that Webb could detect. In the evening, the vapour would cool and condense to form droplets of lava that would rain back to the surface, turning solid again as night falls,”

Scientists from NASA say the James Webb Space Telescope is capable of detecting the presence of an atmosphere which will assist in answering many questions about the mysterious planet.