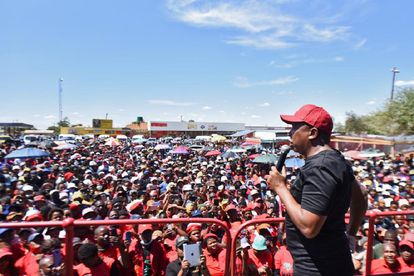 Julius Malema and his Red Berets won’t mind people suggesting that they’re causing chaos – in fact, that’s the sort of thing the EFF has embraced tactically. But those with strong financial interests in South Africa may be concerned to hear that top industry experts believe there could be a ‘tipping point’ at the 2021 Local Elections.

Low vote return for ANC ‘could lead to political instability’

Research notes released by BNP Paribas this week show how the international banking group foresees things panning out on voting day. They believe that any vote share of 47% or above for the ANC will be the least disruptive to both the political and fiscal environment in South Africa, allowing Ramaphosa’s party to fend off ‘populist sentiment’.

However, the lower that number goes, the more chance we have of things getting a little… unstable. Should the ANC poll in the 40% to 45% projectile, it would mark a disastrous campaign for the country’s ruling party. Although this would be enough to take control of most metros and municipalities in Mzansi, such a result would have huge consequences.

2021 Local Elections: Is a strong EFF performance bad news for the financial industry?

BNP, for example, believes that a strong performance from the EFF – as the ANC loses voters – would ‘indicate risk’ for SA going forward. If the Red Berets assume more regional political power as the result of a faltering giant, this would have the potential to create ‘political instability’ within our borders – and that could well be music to Malema’s ears.

“The performance of the EFF will also likely be seen as an indicator of risk, generally through the fiscal channel and stemming from the radical populism of the EFF manifesto. The party has everything to win more wards – its electoral support is growing, and it has not yet won any governance forum outright.”

“With only a few councils to administer, the EFF would have the national resources to put high levels of effort into improving the conditions of the poor if it were to be successful in winning some (small) municipalities outright. An out of trend over-performance by the EFF – above 15% – might lead to political instability and financial anxiety.”