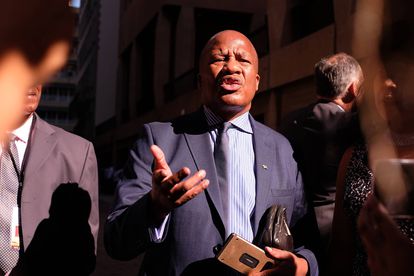 The focus of gender-based violence must speak to men, who are largely the perpetrators of the scourge, says Minister in the Presidency Jackson Mthembu.

“By focusing on the victim, we inadvertently became accomplices by exonerating the perpetrators of violence and therefore became unintentionally complicit in the commitment of violence against women,” said Mthembu.

The Minister was speaking at the University of South Africa where he delivered the Fifth Annual National Development Plan (NDP) Lecture on Friday.

This year’s lecture reflected on the transformation of the socio-economic and political circumstances of women as the country celebrates 25 years of democracy and freedom.

The lecture also reflected on the key objectives set out in the NDP to facilitate the empowerment of women in society.

Mthembu said the lecture was particularly significant as the country continues to grapple with the killings and murder of women and girl children by men in the country.

The Minister highlighted that due to the grips of patriarchy and socio-economic dynamics, the role of women in society is unequally rewarded and their economic participation in economic life undervalued.

The latest employment data released by Statistics South Africa indicate that although strides have been made in the economic emancipation of women in society, women still constitute less than 50% of South Africa’s Economic Active Population (EAP) nationally and that unemployment among women is at 31.3%, which is higher than the national unemployment figure of 29%.

The 2017 Poverty Trends Report of Statistics South Africa showed that black African women suffer the most from poverty, along with children and people from rural areas, and those with no education.

To address gender-based oppression, Mthembu said society must, however, not only narrowly focus on economic factors.

“Other discriminatory practices, social norms and stereotypes all play a role in perpetuating gendered oppression.

“We need a deeper analysis and understanding that research by the likes of UNISA can assist with,” he said.

Mthembu also emphasised that to address gender equality, the psyche of society must be changed.

“The culture of patriarchy and toxic masculinity have been entrenched in our society. These are deep rooted fault lines in our society. We can enact legislation, adopt policies and programmes but it takes more to change perceptions, attitudes and behaviours,” said the Minister.

This will see the subject introduce women’s rights and gender power relations especially at the level of early childhood development phase to ensure the socialisation of boy children is linked to the non-gendered society.

“This will also be linked to a mass media campaign to target communities, public spaces, workplaces, campuses and school, and recreational places like taverns to create awareness and interventions against gender-based violence.

“We must equally join hands as all sectors of society to fight gender based oppression in society. It is only through working together that we will be able to arrest this scourge,” said the Minister.

To ensure that the NDP is gender sensitive and alive to the challenges of women, Mthembu said the NPC is embarking on a review of the NDP, which will focus on progress achieved on women’s development and obstacles to address existing gaps.

UNISA Vice-Chancellor Mandla Makhanya called on government, the private sector and society at large to implement interventions that will ensure the economic emancipation of women.

Makhanya said society must create conditions that are conducive and encouraging for women to be successful in their chosen careers.

“Female students must feel safe to stay late at night in libraries, which are a conducive space, instead of having to rush home or to their residences because of fear of abuse,” said Makhanya.

Another intervention which is already underway, Makhanya outlined, is that the State must meet its target of 50% women representation for senior managers.

This, he said, would assist in putting pressure on other sectors of society, particularly the private sector, to improve on women representation.