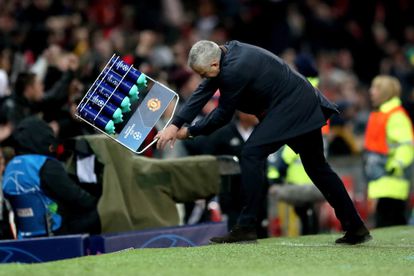 Manchester United manager Jose Mourinho has insisted that the team under his command are not built in his image.

Mourinho responded to the notion that Liverpool are considered to be a team moulded in the image of charismatic manager Jurgen Klopp. Some believe that Manchester United’s dour brand of football of late is down to their manager who has become increasingly rancorous in his dealings with the media of late.

The Portuguese manager, yet again, referenced Liverpool’s spending, when suggesting their was more to being a manager than buying players.

Mourinho said: “A football team is not just about spending the money.

“A football team is like a house, too; a house is not just about buying the furniture.

“You have to do work in the house and when the house is ready, then you buy the furniture, you spend money on the best possible furniture and then you are ready to live in an amazing house.”

Mourinho has won a brace of trophies in competitions previously scorned by Red Devils fans during the Alex Ferguson era, the League Cup and Europa League, since taking over at Manchester United and appeared to taunt the, as yet, trophyless Klopp when asked if silverware matters.

The ‘special one’ said: “I don’t know, it depends on the way you approach it.

Sixth placed Manchester United travel to Anfield on Sunday to take on the league leaders Liverpool, kick off is at 18:00 (SAST).