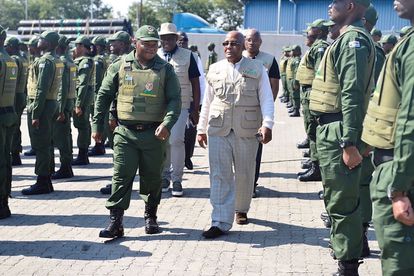 Minister of Home Affairs Dr. Aaron Mostoaledi has appealed to the newly deployed Border Guards to execute their duties with pride, integrity and without fear or favour.

This after Motsoaledi deployed the first group of Border Management Authority Border Guards at the Beitbridge Port of Entry, in Limpopo, on 14 July 2022.

During his speech, Motsoaledi highlighted that the deployment of this group of young men and women was in trying to build a better border management authority.

“We are here today to officially deploy the Border Guards within the vulnerable segments of the border line for law enforcement purposes.

We are trying to build a better border management authority with this group of young men and women who heeded the call to serve in a manner that enables our country to pursue its policies,” he said.

He added that these Border Guards are a third uniformed statutory force in law enforcement.

“You are used to seeing the police as a statutory force and the soldiers as the other statutory force. Today we are adding the Border Guards in that arsenal,” said Motsoaledi.

THE SERVICE TO BE RENDERED BY THE GUARDS

At the present moment, the BMA is incubated as a Branch in the Department of Home Affairs (DHA). “The Commissioner, Dr Masiapato, is at the same level with the Commissioner of the SA Police Service. His job is here, at the borders and nowhere else. He is a Commissioner of borders,” the Minister indicated.

He further explained that by 01 April 2023, the BMA will move out of the DHA and be a Schedule 3A standalone entity responsible for our borders.

“So we are asking you Border Guards, please execute your duties with pride, integrity and without fear or favour. We will support you at all times,” appealed, adding, “And of course, we are going to be watching the Border Guards with a hawk’s eye because we understand that temptations can come with the job”.

“All the Border Guards that are standing in front of you were subjected to a lifestyle audit before their employment was finalised. If we find any inexplicable changes, they will be dismissed,” Mostoaledi cautioned.