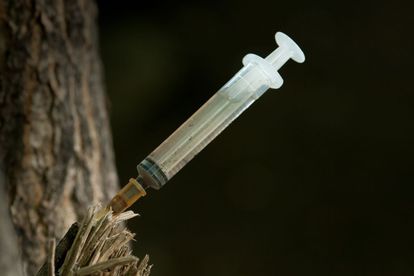 An elderly woman and her son were arrested after R50 000 worth of heroin was found in their home. Photo: Thomas Marthinsen / Flickr

An elderly woman and her son were arrested after R50 000 worth of heroin was found in their home. Photo: Thomas Marthinsen / Flickr

A 63-year-old woman and her 31-year-old son were arrested in Limpopo by the Hawks for dealing in drugs.

R50 000 worth of heroin was found and seized

The Hawks’ Serious Organised Crime Investigation Team arrested the pair just before the weekend. Spokesperson Captain Matimba Maluleke says they received a tip-off about a drug business at a house in Seshogo.

The house was identified after the Hawks followed up on the information and searched along with the Masemola K9 unit. R50 000 worth of heroin was found in the house and was seized by the Hawks.

“On searching the house, suspected heroin drugs with an estimated value of R50 000 were found and seized,” said Maluleke.

The mother and son are expected in court on Monday

IOL reports that the woman and her son are expected to make their first court appearance on Monday, 19 September. Maluleke says the duo are facing charges for possession and dealing in drugs.

Meanwhile, it was reported that an elderly man was arrested by the Northern Cape police on Friday, 26 August, for allegedly selling drugs. The 69-year-old was nabbed by officers in Postmasburg.

South African Police Service (SAPS) spokesperson Warrant Officer Nomvuyo Makoloi said information received led members to an alleged drug house in Boichoko. The 69-year-old’s house was raided on Friday morning – mandrax tablets and other drugs along with R7150,40 in cash, believed to be the proceeds of drug sales, were seized.

The man was arrested and is expected to appear before the Postmasburg Magistrate’s Court on Monday, 29 August. Read the full story here.

In an unrelated incident in the Free State, a 72-year-old woman was arrested for drug dealing in Matlakeng, Zastron on 15 August. Anti-Gang Unit members were patrolling the area when they received information about a woman selling drugs.

They followed the information to a house in Dinotshing and found mandrax and crystal meth (tik) with a street value of approximately R60 000 after searching the property.