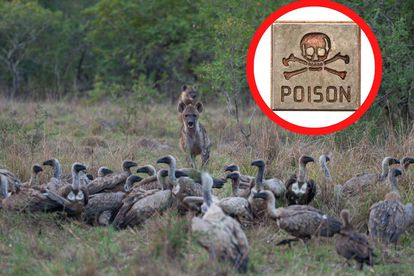 More than 100 vultures and a hyena were found dead on Thursday after feeding on a buffalo carcass that appeared to be laced with poison near Punda Maria in the Kruger National Park.

MORE THAN ANIMALS WERE FOUND DEAD ON THURSDAY

The Park said rangers on patrol made the gruesome discovery.

“Rangers on patrol discovered the carcass of a buffalo, which appeared to have been laced with poison. They also found over a hundred dead vultures and a dead hyena likely to have fed off the carcass.”

It furthermore said with the assistance of the Endangered Wildlife Trust (EWT), twenty of the birds found next to the scene which was still alive were rushed to Shingwedzi and Mohololo Rehabilitation Centre for treatment.

A concerned Yolan Friedman, CEO of the EWT, said given the critical status of vultures globally, poisonings at this scale place the species at increasing risk of extinction.

THE SCENE HAS BEEN CORDONED OFF FOR INVESTIGATION

“The scene has been cordoned off for further investigation, and the carcasses have been burned to ensure that there are no further poisonings.

“Initial indications are that some of the carcasses were harvested for their body parts. South African National Parks (SANParks) confirms that the matter has been referred to the SAPS for investigation.

“We cannot afford to let our guards down, and we call on law enforcement agencies outside the Park to move swiftly to arrest the perpetrators.”

Experts warned that unless the poisoning of vultures for belief-use trade at muthi markets was decisively tackled, vultures faced extinction.

And it looks like things may have gotten worse. Covid-19 lockdowns, coming after years of high unemployment and a stagnant economy, have pushed people to seek new sources of income. This includes poaching wildlife to be sold for belief-use, with some convinced that animal-based concoctions could keep them safe from contracting Covid.

Some people believe vultures possess psychic power. It’s led to false beliefs that muthi made from vulture brains could, for example, help you win the lottery.

According to a study in a peer-reviewed paper by ecologist Mbali Mashele, vultures play a significant role in the spiritual practices and occult beliefs of various communities in Africa.

A total of 51 traditional healers and 197 others were interviewed in nine villages in the Bushbuckridge Local Municipality, near protected areas including Greater Kruger.

Mbali and her team found that vulture body parts were commonly used by people hoping to see into the future, appease their ancestors, for good luck and to cure illnesses.