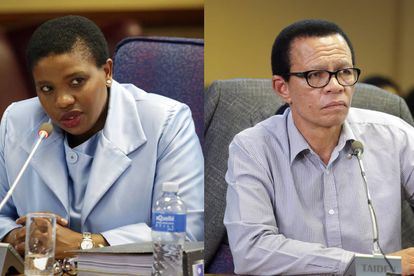 President Cyril Ramaphosa has sacked Advocates Nomgcobo Jiba and Lawrence Mrwebi from the National Prosecuting Authority (NPA), it was announced by the Presidency on Friday.

At a meeting in Pretoria on 10 April 2019, Judge Yvonne Mokgoro briefed President Ramaphosa on the outcomes of the enquiry, having submitted the report to the President at an earlier date.

The Mokgoro Enquiry into the fitness of the two officials to hold office found that the duo were neither fit nor proper to hold their respective offices. The commission found them to be dishonest, lacking in integrity and could no longer be entrusted with the duties that came with their offices.

President Ramaphosa established the Mokgoro Enquiry in October 2018 and placed Advocates Jiba and Mrwebi on suspension with full pay pending finalisation of the enquiry.

President Ramaphosa on Friday reiterated his appreciation to Judge Mokgoro, Kgomotso Moroka SC and Attorney Thenjiwe Vilakazi for conducting the inquiries into the two senior NPA officials with the assistance of evidence leader Nazreen Bawa SC and her team.

The Mokgoro Enquiry concludes its report with the observation, among others, that NPA officials are required to be completely devoted to the rule of law without fail, as the country depends on it.

“As the sole entity constitutionally mandated to prosecute on behalf of the State, in the face of the scourge of crime, the confidence that the public enjoys in the NPA is what prevents individuals from taking the law into their own hands. This confidence underpins the social contract. It lies in the belief that the State can offer protection where laws are not respected.”

In compliance with Section 12(6) of the NPA Act, President Ramaphosa’s decision will be referred to Parliament within the next two weeks.

Parliament then has 30 days to consider the President’s decision and decide whether to uphold the decision or to reject it and restore Jiba and Mrwebi to their positions.

The two have been informed of President Ramaphosa’s decision.

The full report can be read here.