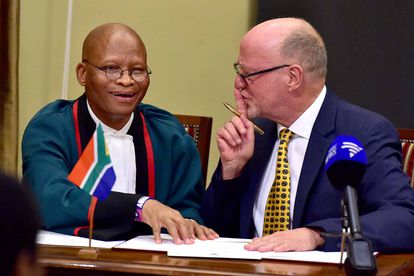 Minister Hanekom shares a light moment with Chief Justice Mogoeng Mogoeng as he swears in newly appointed Members of the National Executive of the Republic of South Africa in a Ceremony held at Tuynhuis, Cape Town. 27/02/2018. Photo: Flickr/Elmond Jiyane,GCIS

Minister Hanekom shares a light moment with Chief Justice Mogoeng Mogoeng as he swears in newly appointed Members of the National Executive of the Republic of South Africa in a Ceremony held at Tuynhuis, Cape Town. 27/02/2018. Photo: Flickr/Elmond Jiyane,GCIS

In 2018, the Heads of Court, led by the Chief Justice, presented the first Judiciary Annual Report for the year ending 31 March 2018. The report was meant to hold the courts accountable for its work to the nation.

The day the report was given was then known as “Judiciary Day” and became an annual event. The report gave an overall outlook on how the Superior Courts performed for the period April 2018 to March 2019.

What Mogoeng outlined in the SA Judiciary Report

While giving his report, the Chief Justice revealed that a wellness programme had been developed to support magistrates and judges. The aim of the programme was to help them cope with the trauma of dealing with cases such as rape, murder, and criticism against the judiciary.

He also shared that the courts would be modernised to encourage improved performance. The latest technology like iPads and smartphones were mentioned.

Mogoeng mentions someone offered him money

The Chief Justice also revealed: “We’ve made a lot of progress in the limited period we have had to bring about change.” He mentioned that someone had offered to pay him R600 million to assist in modernising the court system.

“I may have mentioned it to some that I was approached by somebody, offering R600 million so that we can modernise, but I know that person, I know that institution, I rejected it with the necessary contempt because that’s how capture happens.”

“We don’t want to be funded in the middle of the night however people may posture as benevolent givers of assistance.”

However, he didn’t mention who that specific person or institution was that offered him the money. He did admit that the Judiciary hadsuffered from a lack of funding.

The role of prosecutors and the state of the judiciary

The Chief Justice also insisted that the responsibility of prosecutors was to present cases and support an acquittal. He noted that the interests of justice were meant to be served by prosecutors, “not to pursue a conviction at all costs.”

After his address, Mogoeng also conducted a question and answer session. Speaking about the Zondo commission, the Chief Justice stated that he perceived some people in society were against it.

He insisted that there was no damage intended by the commission and that there appeared to be a well orchestrated plan to undermine it.

Addressing the recent Xenophobia attacks in South Africa he said:

Addressing the spate of Gender-Based Violence (GBV) that hit the country, Mogoeng said: “We need to deal with the root causes of GBV.” He also tackled the new “spanking” ruling.

The Chief Justice defended the Constitutional Court’s ruling on spanking. A few weeks ago, the court mandated that moderate chastisement was unlawful.

He also called on the public to report expose corruption in the judiciary.