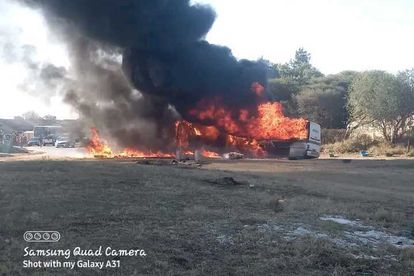 A bus carrying 20 learners exploded in Mmabatho near Mafikeng in the North West. Image: North West Department of Education.

A bus carrying 20 learners exploded in Mmabatho near Mafikeng in the North West. Image: North West Department of Education.

A private bus that transported 20 learners from Letsatsing Secondary School exploded at Unit 9 in Mmabatho near Mafikeng in North West.

The incident happened on Saturday, 16 July and fortunately there were no injuries reported.

According to the North West Department of Education, the Letsatsing Secondary School learners were attending winter camp classes which were held at Mosikare Secondary School in Mantsha Village. On their way back home as the bus was dropping off learners around Mmabatho township it exploded.

North West MEC for Education, Mmaphefo Matsemela said they were grateful that there were no injuries reported from the incident.

“On behalf of the North West Department of Education l am truly grateful that there were no injuries reported. The purpose of the winter camps is primarily to improve the performance of our learners,” he said.

Matsemela also called upon bus operators to be extremely vigilant whenever they are transporting learners.

“They should ensure that their buses are road worthy and they comply with the rules of the road,” Matsemela said.

The department has reportedly arranged counselling for all the affected learners for Monday, 18 July 2022 at Letsatsing Secondary School in Mafikeng.

In a separate incident, five family members were confirmed dead after a fire ravaged their home in Marikana Geluksoord also in the North West in early hours of Sunday morning, 17 July 2022.

According to police, it is alleged that a man went out of his house at about 03:30 and noticed a smoke coming out of a neighbour’s house.

The neighbour then rushed to the house and found all doors locked and windows closed. He ran back to his house where he fetched an iron rod. While alerting others about the incident, he went back to the house where he broke and opened all the doors and the windows.