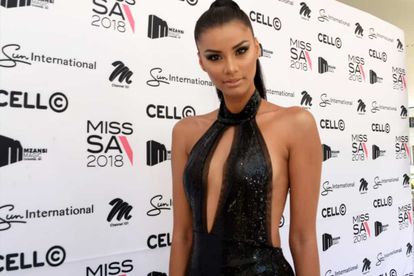 SANDTON, SOUTH AFRICA – NOVEMBER 22: Tamaryn Green in Galluzzi e Gini Dress during the farewell of Miss SA 2018 Tamaryn Green ahead of her departure at the Maslow Hotel on November 22, 2018 in Sandton, South Africa. Green will represent South Africa at the Miss Universe 2018 pageant which will take place on December 17, in Bangkok, Thailand. (Photo by Gallo Images / Oupa Bopape)

SANDTON, SOUTH AFRICA – NOVEMBER 22: Tamaryn Green in Galluzzi e Gini Dress during the farewell of Miss SA 2018 Tamaryn Green ahead of her departure at the Maslow Hotel on November 22, 2018 in Sandton, South Africa. Green will represent South Africa at the Miss Universe 2018 pageant which will take place on December 17, in Bangkok, Thailand. (Photo by Gallo Images / Oupa Bopape)

The 2018 edition of the Miss Universe Pageant takes place from 2:00  (SAST) on Monday 17 December in Bangkok, Thailand. We’ll be live blogging the whole thing – so scroll right on down for our updates.

It will be the third time that Thailand has hosted the event and the Asian nation also sport two winners of the Miss Universe crown.

Emmy Award winning host Steve Harvey returns to helm the show. Harvey had a night to forget hosting the show in 2015 when he infamously announced the incorrect winner causing extreme embarrassment to both himself and Miss Colombia.

Harvey has since reconciled with  Ariadna Gutierrez, welcoming her onto his TV show to speak about her experiences. The American has hosted every edition of Miss Universe since his infamous gaffe and has got plenty of mileage of of jokes at his own expense.

Miss South Africa Tamaryn Green will carry the flag for Mzansi at the 2018 pageant.

Tamaryn will be looking to emulate Demi-Leigh Nel-Peters who brought home the Miss Universe crown in 2017.

Twenty-four-year-old Tamaryn is from Paarl in the Western Cape and was crowned Miss Universe South Africa 2018 on Sunday, May 27. When she won the title she was in her sixth and final year of medical school at the University of Cape Town with her sights set on specializing in pediatrics once she qualifies.

Tamaryn has always been passionate about making a positive and progressive difference in the lives of others. She grew up being exposed to two very different worlds: the fortunate and less fortunate. Tamaryn wants to assist in bringing those two worlds together. Actions speak louder than words; she wants to be a voice to those who cannot be heard, a servant and role model to South Africans and to the people of the world at large.

In August 2018, Tamaryn launched her #breakthestigma campaign where she announced she will be focusing on tuberculosis as her official year of reign campaign. Tamaryn herself also spoke publicly for the first time about her own battle with TB in 2015. The campaign focuses on eradicating TB by 2030. Tamaryn is athletic and loves hiking and swimming as she believes exercise helps with both physical and mental health. Her favourite quote is from Mahatma Gandhi: ‘Be the change you want to see in the world.’

Where to watch Miss Universe 2018

The National dress costume will be streamed on the Miss Universe website from 17:00 on Monday 10 December. The preliminary competition will be screened on the same platform on Thursday 13 December from 14:00.