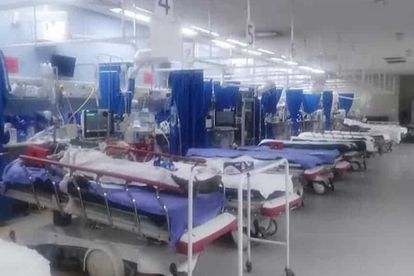 Health care practitioners in Gauteng and the Western Cape say the near-empty trauma units in many facilities, a direct result of the nationwide alcohol ban, mean they can now focus on the Covid-19 pandemic.

President Cyril Ramaphosa announced on December 28 that the sale of alcohol from retail outlets and the on-site consumption of alcohol at restaurants would be prohibited under enhanced lockdown level 3 regulations, along with a raft of other directives.

Medical experts had warned that the country’s health system was at risk of being overwhelmed due to the rapidly rising coronavirus cases coupled with those needing urgent care due to alcohol-fueled incidents.

A new, more infectious strain of coronavirus was recently detected in South Africa that has prompted many countries to limit or ban travel to and from the country.

The Chris Hani Baragwanath Hospital in Johannesburg said it did not admit a singly patient to its trauma and rescue unit on New Year’s day – a historic first for Africa’s largest hospital.

A nurse at the hospital, Busi Ramafoko, urged South Africans to comply with the rules.

“Above all, properly wear your mask. It will protect you. Because an injury is an accident, you will come to our unit. Before you are dispatched anywhere for further management, we have to check on your COVID status. And believe you me, people are testing positive.”

The department’s Marika Champion said trauma cases dropped and most facilities reported on New Years day that it was much quieter than usual.

“We are still collating numbers but reports indicate a significant drop in trauma cases. These include motor vehicle crashes and violent trauma cases which usually accompany public holidays. Trauma cases are usually very time consuming and labour intensive. This reduction helped us to cope with the significant load of COVID cases in our hospitals.”

According to a report from The Associated Press, South Africa saw a drop of as much as 60 percent in trauma cases at hospitals after a prior ban on liquor sales in April and May, a number that began to rise when the ban was lifted.

South Africa surpassed 1 million COVID-19 cases last Sunday, with the cumulative number of cases in the country now sitting at 1 073 887.

The total death toll stands at 28 887 according to figures from the health ministry.