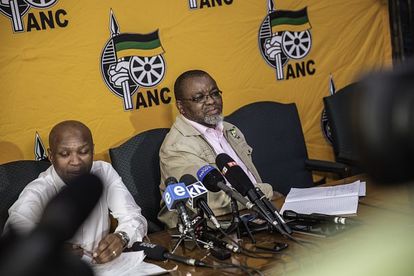 Mantashe lashed out at party president Jacob Zuma and 2016 Local Government Elections campaign manager Nomvula Mokonyane for endorsing Marius Fransman – whose internal disciplinary is yet to start and who could very well still see the inside of a courtroom for alleged sexual harassment – as the man who’ll lead the Western Cape ANC into the Local Government Elections on August 3.

Mantashe told News24 that Mokonyane was under a lot of pressure when she say that Fransman is back in his job as Western Cape party chairperson.

“Nomvula was ahead of herself. In an organisation, decisions are taken formally. You don’t take a decision like a lone wolf. She was pressured because she is in a rally and Fransman arrived and now she must save face.”

Fransman himself confirmed that he has taken up his old job again.

“I have never ceased to be the Western Cape ANC leader since my election to the office. I have voluntarily stepped aside to allow the integrity commission to conclude its work without interference, and am now assuming my duties and responsibilities again at the conclusion of that process. My prolonged absence was only the result of a poorly managed internal process,” he said.

Last week Fransman was standing side-by-side with Zuma for the first time since his suspension and accompanied the president on the campaign trail, a move some see as an endorsement from el presidente.

“There is no decision to reinstate him to the position,” Mantashe said.

He added that Fransman will have to be disciplined and that no decisions as to whether he can be reinstated, can be made before disciplinary proceedings have been concluded.

Fransman, on the other hand, said that there are people within the ANC who want him out, and that he won’t be pushed aside by them. He added that it’s all a conspiracy by the media, opposition parties and some within his own party to smear his good name…

“My refusal to be digressed permits only a brief reference to the many sanctimonious snipes by ballyhoo media hounds; frightened opponents from within the ANC, and the opposition DA and EFF; and Pharisaical political personas attempting to hide in the shadows by directing the stage lights on me…  It is indeed deplorable that a reputation can be subverted by unsubstantiated claims, even in the face of indisputable evidence against such claims.”

“Be advised that I will indeed return to meet my detractors head-on with irrefutable facts, not yet released in deference to procedure, even compromised, and now belatedly concluded.”