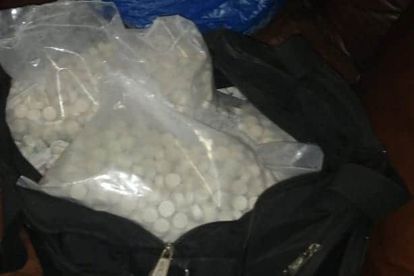 Some of the mandrax tablets that were confiscated by police in Port Elizabeth.
Photo: Twitter/@SAPoliceServices

Some of the mandrax tablets that were confiscated by police in Port Elizabeth.
Photo: Twitter/@SAPoliceServices

Members of the SAPS Rapid Rail in the Nelson Mandela Bay have confiscated over 4200 mandrax tablets valued over R169 000 and R10 000 cash on separate occasions. The two suspects have been arrested after successful drug busting operations in Port Elizabeth.

This forms part of the SAPS’s attempts to keep the community safe, which has seen police officials in the Nelson Mandela Bay increase their visibility and intensified crime prevention operations. This includes actions such as stop-and-search operations as well as roadblocks.

Police said in a statement, “After obtaining search warrants, the following arrests were made:

“Both suspects are due to appear in the New Brighton magistrate’s court on Monday, 11 January 2021 on the respective charges,” Brigadier Thembinkosi Kinana said.

Acting Mount Road Cluster Commander, Brigadier Thandiswa Kupiso sent out a stern warning to drug traffickers that the police’s efforts to cripple their trade will be continuous. “SAPS are entrusted with a duty to rid our communities from these crime generators like drugs. The public is urged to report suspicious and illegal activities taking place in their neighbourhoods,” she concluded.