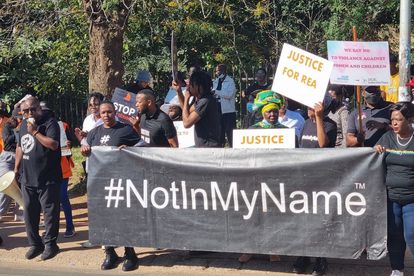 Sipho Nkosi appeared in the Mamelodi Magistrate’s Court on Thursday. He is charged with attempted murder after allegedly slitting the 8-year-old’s throat with a butcher’s knife. Protestors gathered to oppose his bail. Photo: Facebook

Sipho Nkosi appeared in the Mamelodi Magistrate’s Court on Thursday. He is charged with attempted murder after allegedly slitting the 8-year-old’s throat with a butcher’s knife. Protestors gathered to oppose his bail. Photo: Facebook

South Africa has been demoralised by some vicious and gutwrenching crimes over the years. One such example was when a man allegedly slit the throat of his girlfriend’s 8-year-old daughter last week.

Normally stories like these do not have a silver lining. However, the 8-year-old survived the ordeal. The grade two learner has received medical attention and is in recovery. She has been discharged from hospital into the care of social workers and is seeing psychologists.

On Thursday 31-year-old Sipho Nkosi made an appearance in the Mamelodi Magistrate’s Court where he abandoned his bail application. He is charged with attempted murder.

Rather than attempt bail proceedings he made a request that the court would join his family in collecting his personal belongings from his girlfriend’s home.

He was subsequently remanded into custody until his next court appearance on 30 May.

READ MORE: Not In My Name to oppose bail for Mamelodi man who slit girl’s throat

Nkosi from Mamelodi East’s Section A and the mother of the 8-year-old are believed to be in a romantic relationship.

The couple allegedly got into an argument while attending a funeral. In an attempt to resolve the tension he went to the house but the girlfriend was not home.

She had reportedly gone to a car wash and left the 8-year-old with her grandmother.

Nkosi allegedly took a butcher’s knife from the kitchen and slit the child’s throat. Neighbours came to the 8-year-old’s rescue when they heard loud screaming from the home. She was rushed to Mamelodi Hospital.

Nkosi later handed himself over to law enforcement at the Hammanskraal police station.